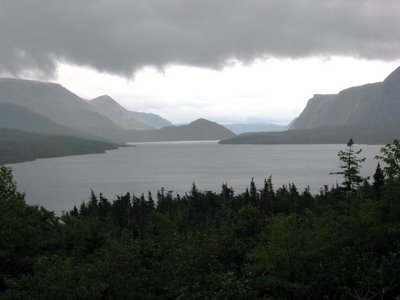 The rain and high winds were back with us as the RV swung around to the north side on Bonne Bay after our night in Trout River. Before leaving the southern side of the park, we drove up the river to the 'pond', the term used in Newfoundland for many of their lakes. Like many of the other ponds in the area, it was carved out by glaciers and at one time was a fjord of the sea. Rising land levels blocked the entrance to the fjord changing it into a fresh water pond from which Trout River now flows. 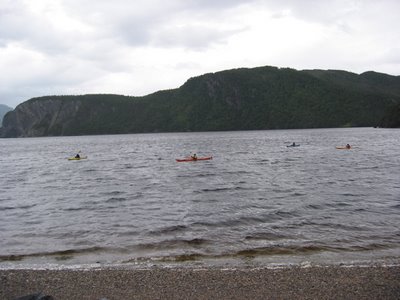 We stopped for lunch on the beach in Norris Point, a village about half way down the north side of Bonne Bay. We parked right at the water's edge, just beyond the Aquarium and seakayaking outfitter's shop. As we munched our sandwiches and looked out the large windows of the cozy RV (can you tell I'm beginning to enjoy the benefits of this rig?), a group of kayakers, the first I'd seen on the water in Newfoundland, came paddling in. Bonne Bay, being relatively protected from the blast of Nature's furies out on the coast, allowed these brave souls a few hours on the water in relative comfort. Needless to say all were dressed for potential immersion in the chilly water beneath their hulls! 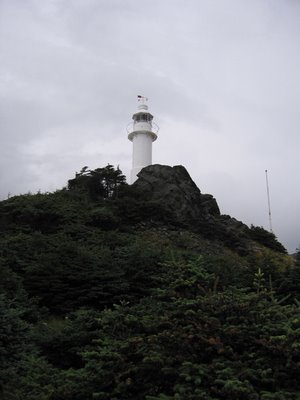 The brave and the daring who venture out to sea and paddle the coasts of Newfoundland, get to see the entrance to Bonne Bay, guarded by this lighthouse, typically, perched high above the raging seas on a rocky headland a few kilometers from the village of Rocky Harbour. I was fascinated by the area, and tried imagining come down along the northern shore soaking wet and tossed by the stormy seas, finally seeing the light ahead and knowing I'd soon be safe on the beach in Rocky Harbour just around the corner... 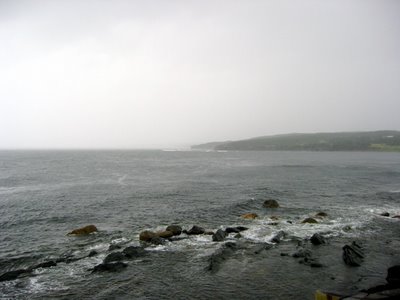 ... Passing under the light, I'd imagine swinging wide of the headland to avoid the nasty looking waves pounding into the shoals just below the light. Then turning into Bonne Bay, my paddle would be stroking hard as I paddled into Bonne Bay to seek shelter in Rocky Harbour, a welcoming sight after my day on the water. 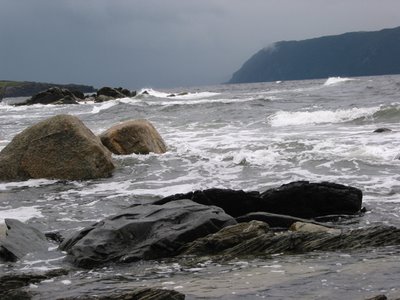 With my heart no longer in my mouth, rested, dried out and fed by hospitable Newfoundlanders, I'd head down to the beach, and reposition all my gear back in place in my kayak. I would launch my kayak, this time into calm, protected waters, a pleasant change from the business of crashing through a surfy beach filled with rocks and jelly fish. My bow would point me southward towards the distinctive waterfall on the southern shore and my voyage would continue, ever onwards! 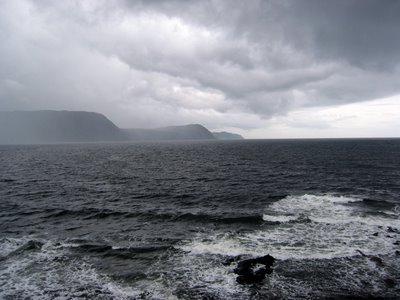 From there I could paddle along the coast called 'The Green Gardens' until the cove at Trout River opened up on my left.

Alas, it's a fantasy which I may never get to do, although it certainly looks possible. Several others have paddled this dream and lived to tell the tale. However, there are other inviting places to kayak and I'll never be able to get through even half the list. Still paddling a kayak along the shores of Newfoundland is something every kayaker ought to consider, even if for only a single coast or two!
Posted by Michael at 9:41 AM

Does that mean you're just a tiny, weanie bit jealous?