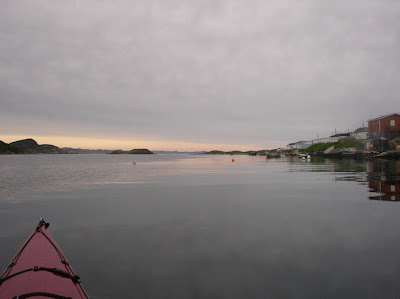 I was excited to finally be paddling along the fabled south coast of Newfoundland having read several accounts of others who had followed its rocky shores. After launching from the dock at the Burgeo Haven B&B, I headed out onto the stretch of water seen in the picture above, called 'Short Reach'. It looks eastward from Burgeo where one can see the hills on the horizon forming the entrance to the first big inlet called Bay de Loup, a long glacially formed bay flanked by high cliffs which mostly plunge directly into the dark waters. Now and then a tiny, hidden gravel beach could be found, but they were rare and most of them are probably not safe for camping given the tidal range in the area. 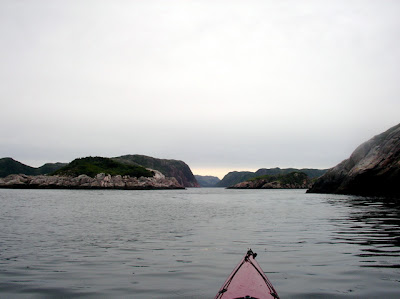 In the background, the high hills of the Bay de Loup inlet can be seen through a group of islands near the entrance. While conditions can be rough out on the strait, it can be relatively calm in these somewhat sheltered waters. A few cabins dotted the head of the bay, seasonal homes for people wanting some quiet and perhaps better fishing and hunting.

Tomorrow I'll try squeezing through a gap into the next bay to the east.
Posted by Michael at 9:37 AM

That looks like a lovely place to wet a paddle.