Kayakers by nature become well acquainted with beaches and beach life, but every now and then a beach turns up with something a little out of the ordinary on it. Here is an example.

These very young children would appear each night on the beaches of Ko Samet, Thailand and perform these swirling fire dances for anyone who'd watch. After the performance there'd be a passing of the hat and the children would head down the beach to perform again.

Do these children go to school during the day? Is this to be their life work? I have no idea, but it was a bit shocking to see how skilled they already were and to wonder what their futures would be like...
Posted by Michael at 7:57 AM No comments: 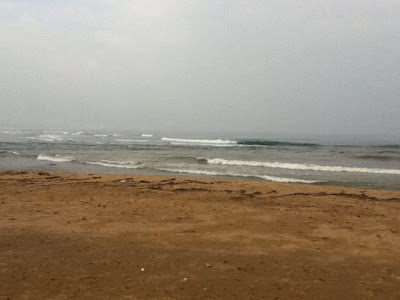 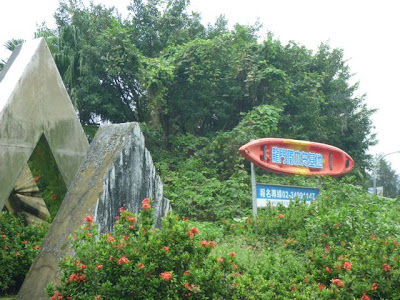 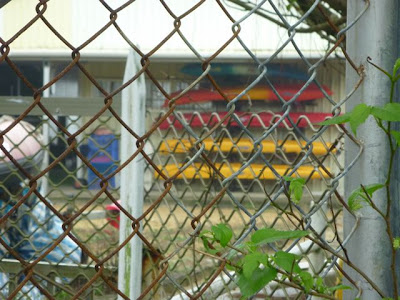 So from a paddling point of view, the trip was disappointing, but I would go again, in season next time. I think I'd also make it a point to travel to places where kayaking outfitters are well set up and expecting people like me, anxious to rent. Certainly these places exist. I just chose not to visit those areas as this particular trip was more family oriented. The SE Asian coastline is definitely made for paddlers with every variety of skill level you could ever wish for. I wouldn't discourage anyone from going. Just do a little homework first if paddling is your primary goal.
Posted by Michael at 1:56 PM No comments: 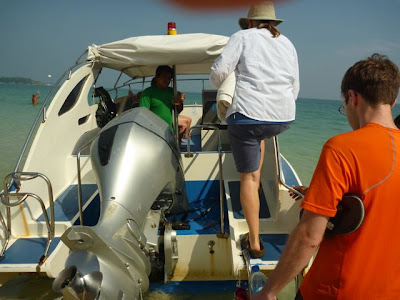 When Ko Samet turned out not to be a paddler's paradise, at least in terms of interesting kayaks to paddle, I looked around for alternate water activities. Large motorboats would arrive off the beach each morning, people would climb aboard over the stern and off they would go, returning each evening, all happy and tanned. We soon found out they had spent the day snorkeling the reefs surrounding some small offshore islands. That sounded interesting, so we booked… 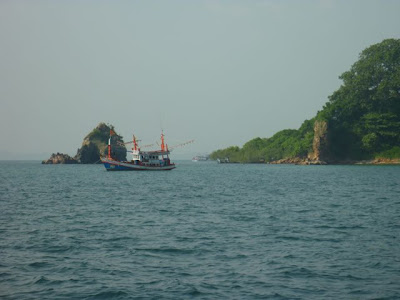 The trip out to the islands took less than an hour and we anchored in picturesque bays, moving every now and then to sample different sites. The equipment this time was in excellent condition and seemed brand new! 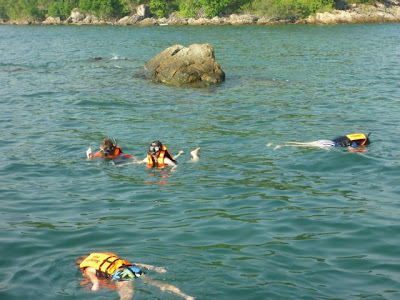 While the scene above water was totally engaging, what we saw under the the surface was shocking. Most of the coral was dead and the marine life usually associated with reefs had mostly disappeared. The cause? The guides put the blame squarely on recent increases in water temperature. It appears that coral can only live within a relatively narrow temperature range and that had been exceeded in this area. In spite of this disappointment, it was good to be swimming in the clear water and seeing what once was. Will it return? Will the commercial fishing be able to sustain itself in these changing times? Only time will tell, but it did make me think about how our impact on the planet is slowly but surely putting the squeeze on us. It led me to post a carbon dioxide watch widgit here on the blog to remind me to curtail the size of my personal footprint... 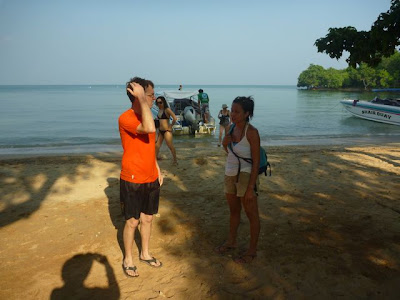 We finished the day by visiting a small island park where we were served refreshments of juice and fresh fruit. Here as well, we got to know some of our fellow snorkelers more personally. In particularly, this lady, a Thai befriended us and we ended up traveling back to Bangkok with her the following day. Throughout the trip we were treated to incredible hospitality and kindness by local people. It was very heartwarming!
Posted by Michael at 12:37 PM No comments: 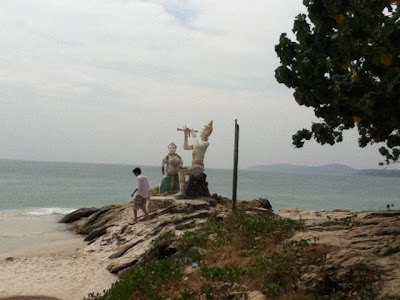 While it wasn't the primary aim of my recent trip to Taiwan and Thailand, I certainly had going for a paddle as one of my goals. The first real opportunity came when visiting the island of Ko Samet on the Gulf of Thailand. Surely there would be kayaks of some sort to paddle on this tourist oriented island! Why they even had a Buddha statue on the beach to summon up the paddling spirits for me… 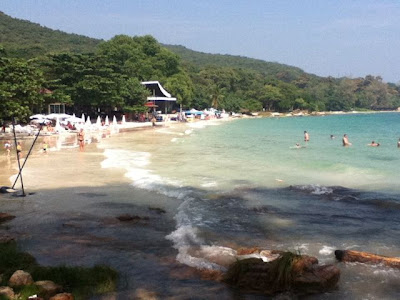 At first, I began to despair as none of the gorgeous beaches appeared to have kayaks for rent, although I was sure I'd seen people paddling some distance offshore. I'd have to extend my search further along the beach... 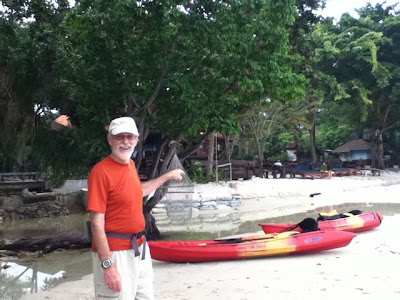 Well, here we are. A kayak of sorts. A bit on the heavy side, but definitely a kayak. Now to see if it's for rent and at what price. Being with my son, we decided to opt for a double and had it towed across the beach to the water. It was much too heavy to carry easily! Checking out the hatch - partly full of nasty black bilge-water - I decided to leave my shoes and towel ashore. The life jackets were not that form-fitting and the paddles probably doubled as agricultural tools at some point during the year, but we were going kayaking nonetheless! 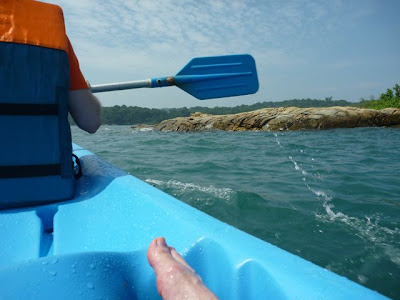 Given the nature of the equipment, we only went out for an hour or so, but it was so good to be on the water in such beautiful surroundings. We paddled south, trying out the boat's abilities in a few rock gardens and so on. Not that manoeuvrable as it turned out, but it took any groundings with barely a scratch. I wanted to try it's surfing ability, but sadly the seas were much too calm with hardly any swell. I didn't go paddling again during the stay. I've been spoiled by more modern, light-weight boats and my light Greenland sticks. I kept reminding myself that kayaking wasn't the goal of this trip...
Posted by Michael at 9:50 AM No comments: