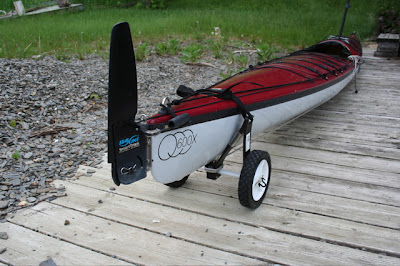 I bought some wheels for my kayak recently made by Washburne Marine Products of Seattle. I took them for a spin today to see how they'd perform. They're not the heavy duty folding kayak cart available elsewhere, nor do they cost anyway near as much. However for a compact, lightweight, take-apart cart made to support only the stern of the kayak, I was pleased with how well they performed. I pulled the unladen boat over some grassy beach areas as well as along a rutted gravel beach, all without any problems or difficulty.

I noticed that Paddling.net has posted a couple of reviews of the Washburne 'Stern Wheels'. One of the reviews was favourable, the other not. I suspect the latter reviewer did not attach the cord running from the axel to the cockpit correctly and this may have caused the problem. 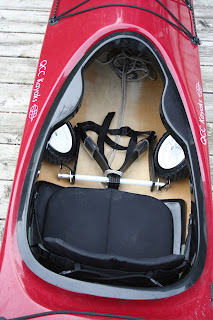 As the wheels easily detach, I might look around for some slightly bigger diameter ones and perhaps fatter ones as well, especially if I find myself in sandy areas like in Prince Edward Island in the next few weeks. From what I've been told, tidal flats can result in long carries, so I'm hoping fatter wheels will work better than the standard skinny ones might.

I wouldn't suggest stuffing the cart into the cockpit like this while paddling, but enclosed in a suitable bag and pushed up against the forward bulkhead, they ought to be out of the way, yet easy to reach when needed. All the parts are made of a tough plastic. The exception is the axel which is a non-corroding solid metal bar.
Posted by Michael at 8:38 PM

Same problem here: The small wheels don't go on beaches (where I have my longest carries) and most of the big ones won't go into the Romany's hatches.

Look forward to reading more about this, Michael. My hatches' diameter is 7", though I do have room for'ad of my rudder bar.

Hi, Michael. I see you have a Q600X and wonder how you like it. I'm still in my first month of enjoying a new Q700X. My blog chronicles the choosing, buying, and learing of the new boat.

You have a great blog, here...very informative and diverse.