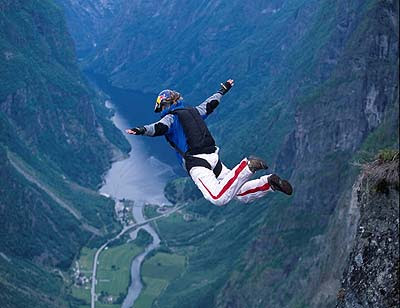 After a morning of driving rain then falling temperatures, I ventured out into a wicked evening of blowing snow and icy roads, to attend the local showing in the Banff Mountain Film Festival. I try to go each year and I was hoping to see Pacific Horizons, the seakayaking film made by Bryan Smith and partner Lise-Anne Beyries on Canada's west coast. Alas, it wasn't chosen for the tour, although it was a finalist at the festival itself. I'll have to break down and buy it, I guess...

What I did get to see was good, if somewhat repetitive. There was the usual helicopter skiing down precipitous slopes, whitewater kayakers plunging over waterfalls and through narrow rocky shoots, not to mention people hanging off cliffs by their fingernails all the while laughing at death. I can enjoy this type of thing, but don't really need a night of it. I like variety and some creativity mixed with my adventures films. 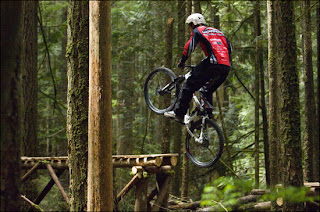 To my thinking, the best film of the evening was one called Trail and Error, about Ryan Leech's ramp bike trail through a threatened temperate rainforest. This was delicate mountain bike riding at it's best. The trail he's constructed has yet to be run successfully by anyone other than him. I guess he's the only person with a sufficient trial and error time on it to deal with it's intricacies!

The main feature - the longest film shown and the person jumping in the top photo - was an account of Norway's BASE jumper Karina Hollekim. Introduced to jumping off high cliffs in free-fall for several seconds before popping her canopy in her early 20's, she continued to jump for several years until the inevitable accident occurred which left her unable to walk.

During the film she talked at length about her sport and her need to push the envelope farther and farther to maintain the thrill it gave her.

Pushing our thrills, perhaps not to the same dangerous extremes, seems to be part of life for many of us. Let's face it, some days feeling that adrenalin surge is what can make a kayaking outing worth the effort. Karina lived for that rush and knew it wasn't going to last. I was impressed with how well she had learned to deal with the heady drug of publicity when her exploits become well known. How people handle that or not can sometimes cause problems for them, hampering their futures as much as breaking her legs on impact did for Karina. It's an interesting world out there though it's clear we must keep our wits together if we wish our passage through it to be filled with good experiences.
Posted by Michael at 12:37 PM

Sensational jump, that of the parachuter. I wouldn't want to be the photographer or the jumper in that one. Nice post.

Thanks for looking for our sea kayaking film Michael. We've sold a bunch so maybe you have gotten your copy already. It was so much fun that we decided to do another one, on the East Coast this time! so look for us at Banff next year, and this time we'll submit a shorter version so it can go on tour!
Lise-Anne
www.pacifichorizonsfilm.blogspot.com