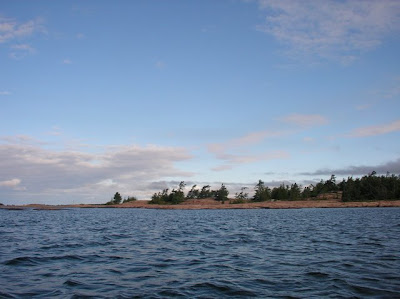 With a light offshore breeze, the following day was perfect for paddling the Georgian Bay coast of Philip Edward Island. An onshore wind off the bay makes this shore a dangerous one as it's cluttered with rocky islets and shallows. 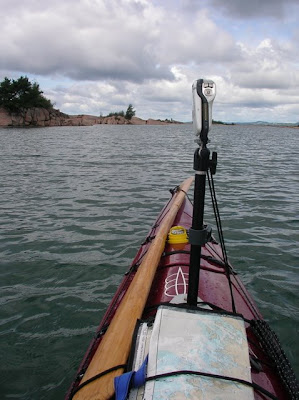 Not only is navigation difficult thanks to the incredible number of similar islands, but also the chances for being smashed into one of the thousands of hazards is very high. One would think it was possible to take refuge behind the outer islands, but in many cases this doesn't seem to be much of an advantage as one is forced into more and more shallow water. Needless to say, I kept a close watch on my charts and foredeck compass to try and make some sense of where I was!

I slowly worked my way along the coast, marveling at the variety of colours found in the rocks along the way. All had been smoothed and polished by ancient glacial action. In many places it was still possible to see the gouges made by the glacier as it slip over the surface on its southern drift. 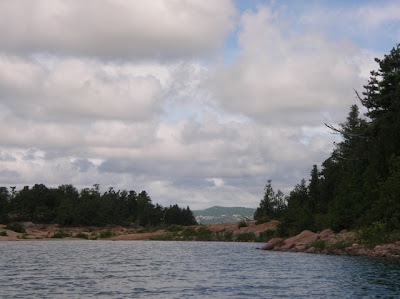 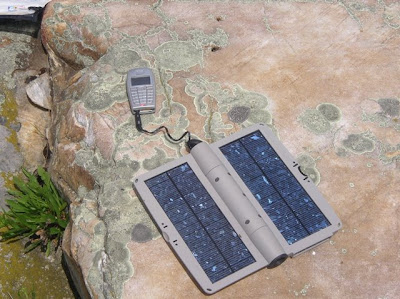 I passed through the narrow channel in front of the town of Killarney and from there westward into Lansdowne Channel. Here I set up my second campsite just outside of Rat Portage Cove. I actually checked out the portage as it would have cut many miles off my trip. Part of it has been paved! Somehow, that seemed a bit too tame, so I elected to paddle around via the 'Hole in the Wall' gap, a place I'd been before on several other trips, including the paddle around Manitoulin Island in 2004. (A kayaker I met a few days later told me he had dragged his plastic Necky over the portage and found it very usable)

I managed to recharge my cell-phone during lunch at the 'Hole in the Wall'. I was also amused to discover my old tent site had mysteriously turned into a bed of white flowers. Now how strange could that be? 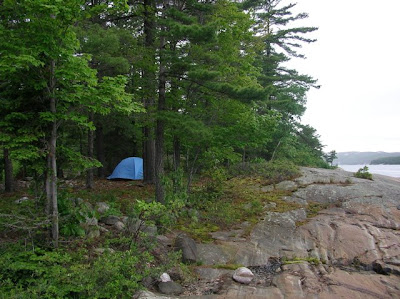 The crossing of several miles over to the entrance to Baie Fine went smoothly in spite of a brisk cross wind from the west. Waves were just at the breaking stage, which made things interesting! The good news was the same wind pushed me rapidly along Baie Fine and to the next campsite above, perhaps the nicest spot I stayed at during the whole trip.
Posted by Michael at 9:57 AM

I'm planning to canoe around Philipp Edward Island this summer and I can't wait to experience the awesome scenery!