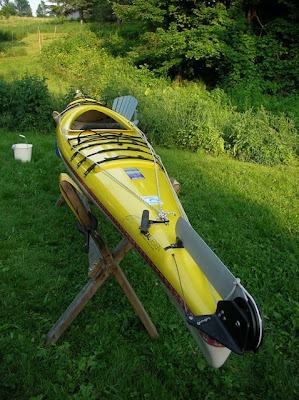 I paddled this Boreal Design Narval kayak to Igloolik in the late 1990's. It was the first seakayak I'd ever bought and it turned out to be a perfect fit for a beginning paddler interested in pushing his limits into new and potentially adventurous regions. I flew the boat to Hall Beach and then followed the coastline for a week or so to Igloolik. My first foray into adventure paddling. When I hit the beach in Igloolik I couldn't have been a happier paddler. 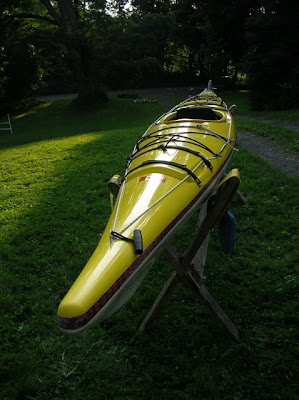 I'd fulfilled a dream and discovered a whole new world of independence and adventure. When asked if I'd sell the kayak rather than return home with it, I declined. I was in love. How could I sell a kayak that had changed my life forever? Well, we all know that times change, things come and go and we move in unforseen directions. I'm ready to sell my Narval. In fact, it's been listed in a few places for the past several months and I've had a few 'bites', but no money has yet exchanged hands. That's okay. I'm a patient person. If someone really wants a good kayak to start their dream, then they'll find this boat. It has a proven record of success and has been well maintained. I'll even leave the polar bear decal on the boat. Proof it has been paddled in the arctic, tested in the ice, so to speak.
Posted by Michael at 10:24 AM

I found it hard to sell my boat, attached to an 'item' as if it has feelings? but I'm pleased it went to a good home and the girl was delighted with it.