When we're out paddling, most of us keep and eye out for wildlife of various kinds. Even folks who paddle the craziest rock-garden sites, tend to mention the seals they saw. Charleston Lake didn't provide any heart-stopping surf swirling around impossibly rugged cliffs, but there were moments of quiet amazement nontheless. 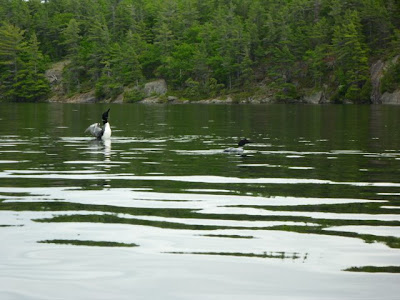 We found the lake to host a healthy loon population. The birds were plentiful, larger than I'm used to and much more friendly, allowing us to paddle relatively close. I like that feeling! 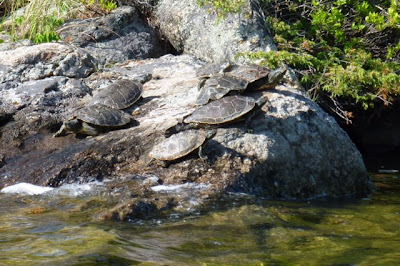 The turtles were nearly as thick in the water. We often saw them sticking their heads out of the water, but more commonly they were piled up on the rocks sun-bathing like this group. 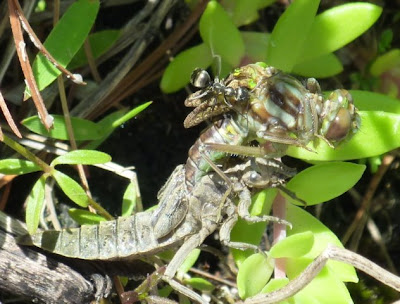 Bugs were thankfully almost totally absent, but we did encounter this life drama. During our lunch one day, we were surrounded by dragonflies swirling through the air. In fact, we discovered we were lunching in their birthing area! We watched a dragonfly nymph crawl out of the water - where it has spent the winter - and, after climbing into some vegetation, it suddenly began to split apart. A new creature soon emerged when things began to go terribly wrong. In the photo above, you can see an ant on the dragonfly busy puncturing the vital system which pumps a green fluid into its wings. Once it had done this, the dragonfly could no longer extend it's flight system. The ant then attempted to pull the much larger dragonfly away! I had no idea that ants would be a threat to this birthing process. We all watched totally amazed with what took place.
Posted by Michael at 4:56 PM

Very cool!
Thanks for the Nymph photo,never saw that before.Look's like you lucked out that day!

Wow, love the turtles! In my part of the world (Sydney, Australia)we don't see a great deal of wildlife around the water. Except for Bull Sharks, but then you don't really want to see them!

I remember when I was young seeing empty shells on rocks around the lake and I always wonder what insect was in it. Looking at the picture I recognized it!

Thanks Michael for that great story and superb picture.