Looking for Whales, the end. 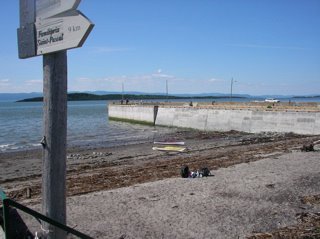 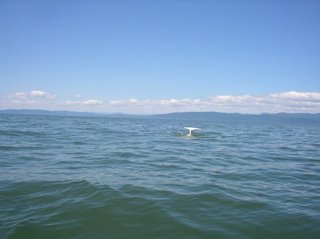 So the first weekend was a bust. No whales and very little in the way of paddling either. A few weeks later, we had a second chance. Once again we rented a little cabin as the weather way rainy when we arrived on Friday. It rained on the Saturday, but Sunday was a glorious day with briilliant blue skies and just a breath of wind. We were off!

We drove to Kamouraska, parked the car and headed out before the tide reduced the river to a mud field. We aimed for some islands a mile or more out into the river and kept our eyes pealed for whales.

The islands were mostly steep sided and offered little in the way of landing spots. The stunted trees looked wind-shaped and gnarly. Some of the islands were devoted to bird sanctuaries. We saw snow geese, black headed gulls and cormorants, the latter nesting up in the poor trees. Ungainly Great Blue herons were also nesting in the trees, a sight almost too strange to believe. But where were the whales?

We decided to paddle downstream, following the chain of islands which paralleled the shore. Then, a white flash in the water, there they were! Belugas, several of them in close to one of the islands. Their white backs would break the surface, roll and then with a raising of the tail, down they would go. As we watched them it became clear we were in an upwelling of the river current and the belugas were taking advantage of the good feeding to be found there. The whales were quite aware of our presence. A couple of times they would move in close and release air under our boats. The first time it happened I thought I'd been hit, but we soon learned it was their way of playing with us. When we sighted a baby whale, we wondered if we weren't being warned to keep our distance!

It was a magical few hours on the water. After watching the whales work the area, we slowly made out way back to Kamouraska. We wanted to get in before the tide left us with a long trek in to the shore. We'd had seen only one other boat on the river all day, but when we stopped for lunch on the only sandy beach we'd seen, several other kayakers pulled in right behind us. We wondered if they'd seen whales too, but as they kept to themselves, we never found out.

Back in our cozy cabin, we both agreed we'd been blessed with a special day out on the water. It was worth the days of waiting, the milkshake water conditions, the driving rain and the blasting wind. Looking for whales was a perfect paddle!
Posted by Michael at 1:04 PM