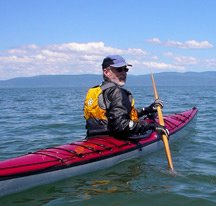 The St Lawrence river in Quebec is well known as a place to see and interact with whales. In fact the north shore is known as the 'Whale Route' where spouting whales can often be seen from the roadside. In the spring of 2005 two members of the 'ckayakers club' went out looking for these whales. Here's the story!

The first weekend out we departed from the town of L'Islet on the south side of the river. The wind had been blowing a gale all the previous night churning the water into something that more closely resembled a frothy chocolate milkshake than it did river water! To make matters worse, the tide was low forcing us to slog out to the water through gluey mud. However we were pumped for whales and wanted to head out and see what conditions were really like. I launched first and began punching my way through several wave sets. Bam! A wave hit the deck and my spray-skirt popped open. I began to taking on water, more and more with each oncoming wave. In my attempts to avoid rocks and continue facing the waves, I found it impossible to get the skirt snugged down around the cockpit rim. I tried moving sideways into the lee of an old dock, but even this proved useless. That skirt refused to lock in place and in the spray I couldn't figure out what the problem was. I'd have to return to shore and find out what was causing the trouble.

My paddling partner had not been successful launching her boat either. When I finally found her through my spray covered glasses, I could see she had decided to pull her boat up on the beach and watch to see what I was going to do. I turned in towards the shore, taking advantage of a few smaller waves to make the turn. I was pleased to see the boat turned easily in the wind and waves. I'd heard stories about boats that refused to follow orders in similar conditions, giving their owners a rough time.

I was soon surfing rapidly in towards the beach. My QCC is not a fast surf boat, but in these conditions, I rapidly picked up speed as each wave passed under the boat. I had the rudder up and was leaning out, steering with my paddle. It was exhilerating watching the bow cut through the backs of each wave and then crash through the foam as the wave broke up. Then it happened. The load of water I was carrying in the cockpit finally got the better of me, and shifted. Before I could recover from the sudden tilt of the boat, I was over. I made an attempt to recover, but the shallowness of the water made a wet exit the better option. I got my first chocolate milkshake bath ever. I was in the shower for the longest time before the water began to run clear!