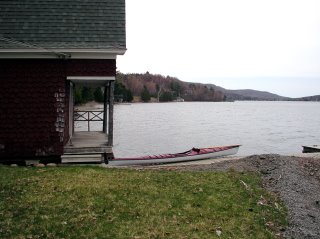 The ice is bearly out of the lake, mine is the only boat I've yet seen on the water, but it's the weekend. Anything can happen on the weekend. When I put in, the lake was crystal calm, but exiting the bay there was a good chop driven by a south wind. That means about a seven mile fetch, so I was expecting some fun. I purposefully headed down wind so I would be bashing the stuff on the way home. By then I could expect some 2 footers perhaps.
It wasn't to be. Instead I played 'trapped', sneaking around and dodging a suspicious looking boat with those metal lattice things up over the wind-screen. The only people around here rich enough for that stuff are the 'zebra muscle' cops. I was having a great time until I heard their boat out there somewhere. I just knew some weekender would have their boat out. At first I figured it might be a fisherperson. Then I saw the lattice. Cops! Great they'd wonder where my 'zebra muscle' stamp was, and would generally harass me because I'd failed to buy one so they could spend the summer chasing small boaters (the only ones they can catch) and generally wasting my tax money. We all know this scam well enough by now!
They were about a mile away coming down the opposite shore. I looked for possible cover. Not much, but up ahead was a point I could slip behind. I pushed the paddle down hard and in no time skidded into an edged turn around the point. By then I could hear the cops had crossed over to my side of the lake and weren't far behind. I worked fast. I hit the beach, threw my paddle into the deck cords and yanked the boat out of the water. A short run up the beach, around some trees, across a little meadow and I was back in the water again. A shallow creek with good high banks would permit me to paddle unseen back to the lake where I would come out behind the cops. It was a perfect dodge!
I could hear the motor boat turn in towards shore as it passed the point. Now the fun would begin. I had totally disappeared! I let my kayak slowly drift through the trees along the creek as it headed to the lake. I had fooled them! They had stopped, no doubt pondering whether I was worth a chase on foot. No doubt they knew they'd catch me. After all, I was carrying a kayak on my back! It should be an easy kill.
I waited, hearing nothing, then cautiously paddled towards the lake. What! Several trees had fallen across the creek and blocked my route. I was trapped. The cops wouldn't have far to go to see where I'd gone. I sculled over to the bank and peered through the trees. There they were... fishing! Not cops at all, but early fisherpersons with a rich person's boat. Well, I'll be.
Last summer I had bought a small folding hand saw thinking I would use it for a paddle down the Lower North Shore. I never made that trip, but the saw was just the tool for slicing my way out of that creek. Good thing I'm not too well trained at cleaning out my boat's hatches...
Posted by Michael at 4:07 PM