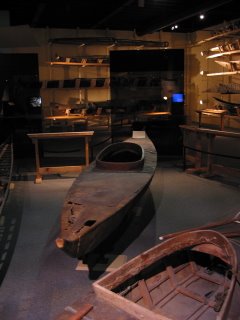 While out paddling today in a brisk north wind, which on my lake is not its normal direction, I got thinking about all those qajait - those boats built in northern Canada. Where are they? Why can't we see them? How many still exist? The Canadian Canoe Museum in Peterborough, Ontario has several examples, as well as some Greenland varieties. Given that Canadian Inuit have produced a wide variety of boats, it is a pity so few can be seen in our museums. All the examples seen in this picture are from either Quebec or Labrador and look somewhat similar. Yet other styles existed from the west, from the barren grounds and from Baffin Island. In each place the boats under went modifications due to the hunting realities that faced the builders. Yet they seldom see the light of day.

I was the only boat on the water all day, in spite of the warm, sunny weather. I spoke to a lady out raking her beach, two others were passing the time with their sketch books (did I get drawn?). A single, brave, middle aged lady was tucked into a corner sun-bathing in a bikini! I found that wonderful. She made me think that museums need to get out their middle aged kayaks and show them to us, wrinkles, sags, white skin and all. We don't care. We just want to know they were built and that they still exist for us to admire. What they look like isn't important!
Posted by Michael at 4:48 PM