As my wife's car is laid up in the garage for repairs, my grand adventure is on hold for a few days. But all is not lost! I decided to follow the lead of the other adventurers out there and so got an early launch into a calm lake with the idea of paddling all day. Just like the real expedition people do!
Now I don't usually do this sort of thing, so I was prepared for some surprises, aches and pains. I have a fair amount of endurance, so the first few hours went well. No pains kicked in to wreck things, no cramps in my legs, nothing like that. The day was hot so I did suffer a bit from the sun and heat. I laid on the sun-screen, but wish I'd brought along my wide-brimed hat. I'll probably feel that sun right into the evening. 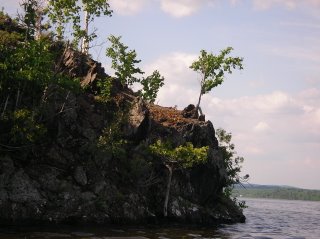 The turn-around point at noon I named Point Blister after a blister which formed in the early afternoon on my right index finger. That was a first for me. I never get blisters on my hands from my paddle, but there it was. I will bring along my leather palmed gloves on my next adventure. I was also getting low on water by mid-afternoon. I had thought a liter bottle would be enough, but the heat was unexpected. I have a bladder bottle system which holds 2 liters, so that will also come along next time.
As the afternoon went by, I ran into patchy winds which kept changing directions, but generally wind and waves never became a problem. I kept waiting for a muscle to start howling, but other than a slight twitch in my left wrist which came and went, I was in good shape as I drifted into the dock. 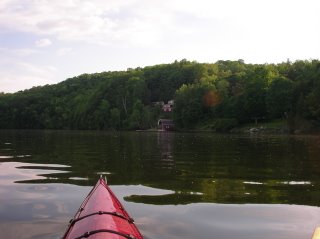 My all day paddle adventure was a great success, but my wife tells me her car won't be ready until tomorrow night. Does that mean I have to go out again? All day? What if it's windy or raining? I think I'll go anyway. I could really get into this stuff!
I have no idea how far I was able to paddle, but I figure at about 4 mph and a little over 8 eight hours, I might have done around 35 miles for the day. I wonder if that's good enough to get invited on a real expedition somewhere...
Posted by Michael at 8:04 PM