It was -30°C with a crisp wind so I wasn't about to waste much time wandering around the little village. When I saw a number of people in the window of Tattie and Nuna's house, I headed for the door. Inside, people were piled up everywhere like they'd been thrown inside in a hurry. I carefully made my way in trying not to crush any fingers or toes on my way to a bit of empty space along a far wall. My glasses steamed up in the sudden heat. The only light in the place came from a bedroom where some of the kids were already asleep. 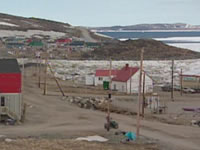 Old Tomassie Kudluk was telling a story. He was an elder, a qajaq builder, and one of the last of the great story tellers in Kangirsuk. He knew all the old stories, but tonight he was mesmorizing his audience with a hunting tale from his younger days. In spite of the packed house, the only sound was Tomassie's quiet voice working it's way through the story once again.
Tomassie was not a big man, standing perhaps 5 ft 5in at the most. The story he told was about a bear hunt he had been on years ago. The men he was with had located the winter den of a mother bear. Being smaller than the others as well as agile, Tomassie was elected to wiggle his way throught the snow tunnel and into the den of the sleeping bear where he would work his way behind her and then wake her up. The idea was that the suddenly awakened bear would panic and head towards the entrance where the other hunters lay in wait.
I guess the plan must have worked. After all, all those involved were still around to tell the story, but it made me think that somehow, the old days provided more opportunities for serious excitement than we can easily get today. I mean you can't even play with the bears in the zoos these days! 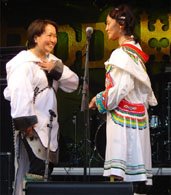 The next day I mentioned the story to some friends who'd been there listening as well. They were amazed that I'd been there too. It turns out they were so involved in the story, they'd never seen me enter the room or leave afterwards. Imagine being so connected to the story-teller that all else disappears. The people in that room had actually entered the story itself and had been transported to the time and place of the actual event. And we like to think time machines don't exist!
Tomassie's dead now, but one of his inland style qajaqs can be seen in the Canadian Museum of Civilization in Ottawa.
It made me realize it's a bit like you're paddling along then suddenly you 'wake up' to the fact that you've been paddling on automatic for a while, lost in your thoughts, in another world entirely. Perhaps that why many people find paddling so relaxing and comforting. Traveling by dog sled is much like that too. I remember sleeping on a sled for several hours not knowing we had arrived in the village! No one said anything. They let us sleep away the day!
Posted by Michael at 10:12 PM

its lovely to listen to a good story teller, some people have a real knack for it. its great to have them along on camping trips too, happy paddling

Love this post. Yes, some people do indeed have a knack for storytelling. And how wonderful to be transported, if only for a moment, from a cubicle in New York City to a storytelling session in a small house in a small village in Canada.