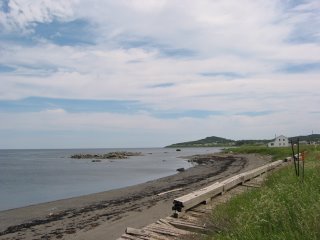 I drove to the Gaspé along the shores of the St Lawrence river so this posting will be about that coast. There is a new series of maps out called 'La Route Blue' which, when finally complete, will become a 'water trail' outlining various features of the south shore of the St Lawrence river. At the moment it is complete from roughly Quebec City to Rimouski. Places to launch, land, rest and camp as well as ecologically sensitive areas are all marked both on the map as well as via signs on land. In theory, these maps should make a kayak trip interesting and fun. Unfortunately, for me at least, most this coast is low lying, girded in gooey mud flats and awash with boulder strune shelves of jagged rock just waiting to feast on my precious gelcoated kayak. While there are some really great paddling areas, like the islands off of Kamouraska where I saw beluga whales feeding last spring, most of the coast is a somewhat boring paddle at least from a scenery perspective. I had thought it would make a great paddling trip, but having now driven its length, I see problems. 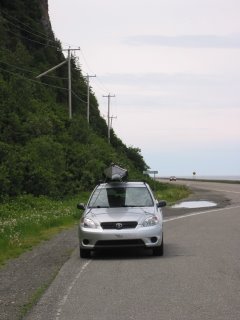 The prospects begin to change north of Matane where the first picture (above) was taken. Gone are the endless mud flats and real beaches with some possible camping opportunities begin appearing. Things change quickly however, so that by the time one reaches Sainte Anne des Monts huge hills plunge directly into the river. The hills are so high and abrupt they are now well known hang-gliding sites and draw dare-devils from afar. The road either tucks inland to avoid the cliff faces or is built on fill alongside the cliffs themselves and protected by concrete walls. Towns appear only in the deeper bays and coves where tiny bits of flat land affords room for a few houses, a huge church and a place to drink. These villages are the only place a kayaker can land because of the cliffs or the concrete walls supporting the road bed. I can't imagine a worse lee shore in a storm! You'd need to carry a grappling hook on your rear deck within easy reach... The propects were scarey indeed.
This picture of cliffs and tiny towns carries on right to the outskirts of Parc Forillon where the cliffs end up pointing out almost needle-like into the Gulf of St Lawrence (see below). 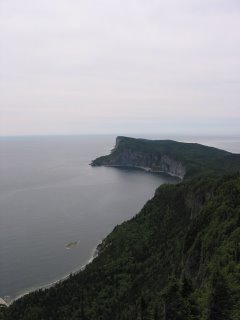 Depending on the wind direction, the best choice is to camp on the south side of the park. The north side seen in the picture is almost always windier and the put-in choices both have issues I didn't care for. I'll talk about them in detail in the Part 2 of this post.
Posted by Michael at 8:12 PM