I had been looking forward to visiting a few of the places in Newfoundland where people used to live until recently. Many of these old 're-settled' communities were out on islands close to the fishery and thus provided an advantage years ago. As the way of life changed when the fishery declined many of these places were abandonned, some willingly, some not so. 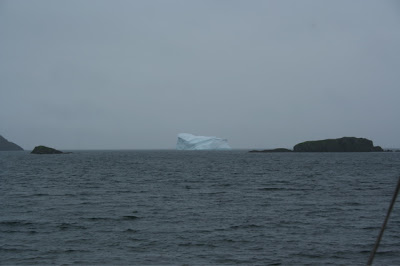 The Kayak Newfoundland and Labrador Club had planned a 3 day paddling trip out to one such community on Ireland's Eye, an island on Trinity Bay in July. I was looking forward to meeting some local paddlers and visiting the island to get a feel for what life there must have been like years ago. The put-in was at Old Bonaventure seen in the picture above. I headed down there the Friday before the launch. It was a miserable day, rainy, wind, fog with heavy seas pounding outside the cove. Clearly, the trip would be put off unless a miracle occurred. And, can you see that lovely iceberg? Getting out to it would have really iced the cake! I wasn't a happy boy... 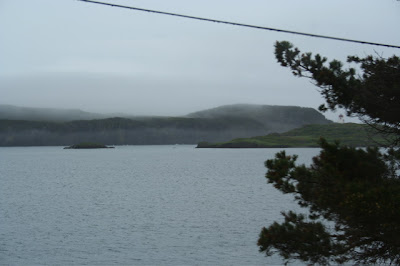 I had planned to camp in the cove overnight, but the foul weather forced me to retreat into nearby Trinity and a warm, dry B&B. The next morning, the weather had not changed. If anything, the winds had increased. The trip was off. Fortunately I did get to meet a number of club members on subsequent paddles here and there. I discovered they are a lively and very competent bunch with lots of stories to tell of their paddling exploits as well as other paddlers they've been out with, both Newfoundlanders and others like me, from 'away'.
Posted by Michael at 10:10 AM

just catching up. love the continuing adventures of Newfoundland, its a beautiful place.

Claire - you bet! See you there next year?

soon as i win the lottery I'm heading over.