The adrenaline began to rush into my system as I felt the wave lift the stern. I dug in hard to accelerate the boat ahead of the wave and surf down into the mouth of the sea cave. From Wright's book I knew the cave was large enough inside to be able to maneuver once inside. The tide was nearly at it's highest, so the rock shelf he mentions rising out of the water at low tide near the entrance would be water covered and not pose an obstacle. Twisting around and edging my boat to the left as the wave subsided, I saw my companion also carve down the next wave and enter the cave behind me. Suddenly, a rebounding wave caught me, tilting my boat over. I braced hard, but it was too late. I was over. As I set up underwater to roll up, my kayak received a jolt: I'd been hit by the incoming kayak! I reached up and felt the hull slipping past me, then I completed my roll. That was a close call, but no harm done! 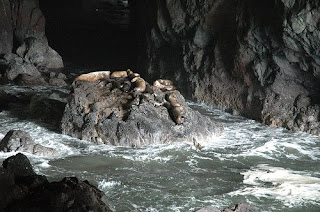 We had plenty of light inside the vast sea cave and once orientated, headed deeper inside to look for the iron rings and staircase supposed to be located deeper inside. Then we saw it. Over the years, the ceiling must have fallen. There did not seem to be any possibility of reaching the back of cave. At first I wondered whether we could climb over the jumbled rocks at the fall, but this too was impossible, or at the very least, dangerous in the bouncing waters. To make matters even more complex. seal lions covered many of the rocks. They seemed friendly enough in the water, but did not like it, making threatening gestures whenever we approached them basking on the rocks around the cave. It appeared the only entrance we knew of to the island was cut off probably forever. 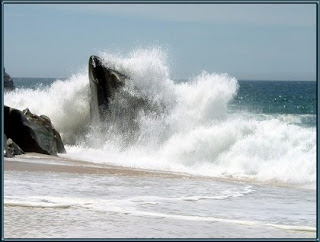 We turned and paddled back to the cave's entrance and waited for our chance to exit. I'd been a bit concerned getting out might be difficult, but the face of the swell was gentler than it seemed and we paddled out easily and headed northward towards the rock spires we'd seen earlier. At the least we'd have some fun there before continuing around the island to our waiting mothership. As we made our way towards the rocky towers, we could see the waves breaking over them and spilling across the sandy beaches which connected them now the tide was going down. Would they too deny us any adventure?
Posted by Michael at 1:53 PM

2. I will have some of whatever it is you are having Michael!