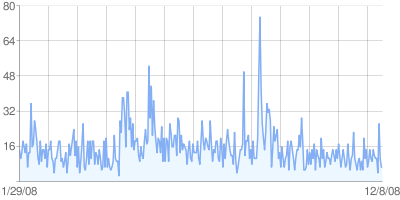 Watching YouTube, that is! A glance at the right sidebar will tell you I have an account on YouTube where I've posted some videos of my travels over the past few years. Recently I discovered that there is a section on the site called 'Insight' where you can get a variety of graphical information about who has been watching your videos. The graph above represents the number of views since January, 2008. Okay, not that impressive, but it appears a steady stream of people (about 15 a day on average) are dropping by for a look. I wonder what happened in August that produced the spike in viewers?

Other data on the 'Insight' page includes the male/female split (69%/31%), which videos have been the most popular (Pogo Jump) and a map indicating where the viewers have been coming from. I suppose it's always good to know that the graph above hasn't flatlined at zero when you weren't paying attention!
Posted by Michael at 12:27 PM

I have visited your beautiful and stylish website..And I can suggest,


Please put mine, and tell me your link, my e-mail is mceselko@gmail.com, I'll put it immediately...