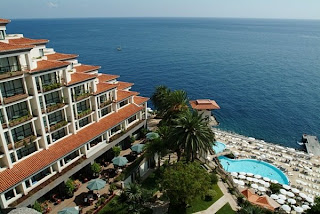 Obviously either our charts were seriously out of date, this isn't an imaginary island made up by Fowler Wright, or the discontinuity we'd passed through at the headland was more serious than we imagined. Ahead of us, spread for kilometers along the cliffs lay a magnificent sea-side city devoted, it would appear, to a Club Med lifestyle. Hotels and condos stretched to the horizon, cascading off the cliffs into the sea below. All manner of watercraft filled the bay before us.

Where to go was the question, but that was soon answered for us when a hard hulled Zodiac sped up to our kayaks, circled and motioned us towards a marina about a kilometer ahead of us. As we entered the enclosing breakwaters, a young boy in a light skiff pointed to a dock low enough to the water to enable us to disembark without having to climb a sea-wall. People began crowding around us, talking and jestering, all very excited, but unfortunately for us, completely unintelligibly!

Soon someone who appeared to be in charge motioned us to follow him, indicating first to the crowd that they were to leave our kayaks alone and leave the area as well, which they did. We entered a building at the foot of the marina's dock area and were shown showers and changing rooms. Perfect, I thought thinking a cold beer would be even better. No sooner had the thought come into my head when two boys rounded the corner with a ice chest trolley. Cold beer! Life was good and getting better!

We both changed out of our paddling gear, basically our swim suits and so on, and slipped on some street apparel. Back in the main room of what I gathered was the marina lounge, our new friend attempted to speak with us, but other than the odd word here and there, it was clear we had few words in common. Thinking back to Wright's book, it occurred to me that a mixture of slang English and French was originally spoken on the island, but so much time had passed, neither of these languages appeared to have survived in anything like their original form.

What was clear however, was the fact that we were guests. Dinner was being laid out in the lounge and we were made to understand rooms had been given to us for the night! I wonder, briefly, should I try contacting our mothership...?
Posted by Michael at 3:52 PM