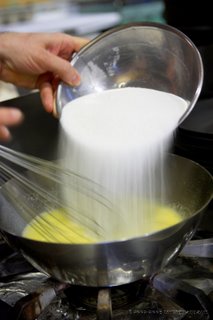 One summer the Inuit hunting camp I was living in ran out of sugar. As a result none of us ate any sugar or anything with sugar in it for a couple of months. It was unpleasant at first, but we managed to do without until finally we hardly missed having it. We lived happily on the food we were able to catch, 'country food' it was called back then.
At the end of the summer I returned to the village where my summer had begun. I went up to a friend's house and was offered a cup of tea. Naturally I reached for the sugar bowl, swirled a teaspoon of it into my tea and took a sip. Bang! My mouth went totally berserk! I could not believe how incredible that tea tasted. It was actually the taste of the sugar suddenly, after all that time, exploding in my mouth. It was a mind blowing experience and I've never forgotten the power of sugar from that day on.
So when I was checking to see how Renata Chlumska was getting along on the last leg of her journey around the USA, a comment she made caught my eye. She mentioned she was eating 6000 calories each day to power her trip, whether she paddled or bicycled. That struck me as a lot given she is not a large person, but I assume she knows what she's doing. Obviously anyone involved in a high energy activity, especially one that lasts for weeks or even months, must pay special attention to their diet. I'm sure she has this all worked out. To sustain oneself over the long haul, I would imagine that calorie consumption would be a critical factor.
According to one guide put out by the Heart and Strike Foundation of Canada, the "moderately active female" needs to consume up to 2100 calories per day, the equivalent male needs up to 3000 calories per day. So you can see why the figure of 6000 calories caught my attention!
I next got thinking about the average paddler like myself. I don't often paddle for days on end, but I have been out for a couple of weeks and more and my calorie consumption has not been high on my list of things to check into during preparations for the trip. Perhaps I should look at this again as there must be thing I should know.
For example, there are some well known side effects which show up when one is living in a calorie deficit situation. The first obvious one would be weight loss. More worrying would be possible changes in one's mental attitude, which could seriously affect the outcome of a trip, especially over the long haul, where the effect probably creeps up on one slowly. I'm not certain what specifically these symptoms would be, but I suspect mood shifts, indecision and general lethargy to be in the mix somewhere. There may be other things as well.
All 'food for thought' as they say, so next time I head out for several weeks or more, I'm going to give my calorie intake more serious thought than I have done previously.
Posted by Michael at 4:15 PM

I think you can get addicted to sugar.
I have never been on an extended paddling trip but I am always starving by the time I get to camp, and even my cooking tastes great at the end of a day.
it must be difficult to balance what you have to eat and how much space you have to pack it into your boat, land support at that point being invaluable for re-stocking.

Hi Claire-
I think it's not just how much, but what form the food energy is in. For example, sugar is instant energy, while carbos are slow-release. It seems to me a person must eat both as well as protein etc. It's an interesting subject I want to explore further. Thanks for sharing your thoughts!