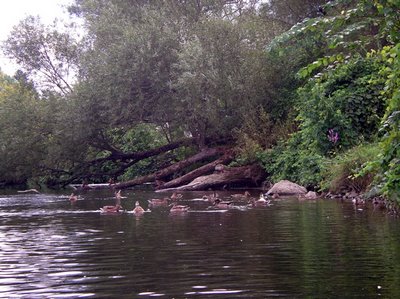 I often paddle under the bridges through the little town and down the stream which forms the outlet to the nearby lake. It is part of the almost daily circuit I make when I paddle this lake. When I was young I don't remember there being ducks or any other kind of wildlife on this stream, but today ducks form part of the urban scene along the river. For the most part they seem to be mallards with what appears to be a few escapees from nearby farms. These latter ducks are not the pure white of their forebearers, but present more of a mixed parentage, no doubt from their relationships with the mallards over the years.

I sometimes wonder about these birds. They don't seem to migrate and can be seen swimming in the stream all winter as it doesn't freeze over any more. I suppose people, especially those at the stream-side restaurants, feed them, so they get by just fine during the cold months. With all the talk these days of avian borne flu, I also wonder how safe we all are paddling among them and whether children should be jumping off the docks near where the ducks congregate. I really have no idea, but I do at least wonder about this whole business from time to time. I also avoid showing off any rolls to the passers-by while paddling in the stream. No doubt we've all benefitted from that form of visual exploitation.
Posted by Michael at 9:30 PM

nice post. So what we are wondering then is if the first sign of a bird flue epidemic in north america will be recognised by the sudden disapearance of kayakers?