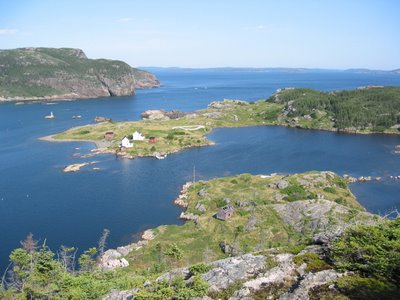 To spend ten days in a rented RV in Newfoundland can be either a voyage to the Ends of the World, a visit to Paradise or a descent into the Bowels of the Earth. You can take your pick. It's been all of these and several more to its visitors. To me, it was a sort of homecoming, a return to a northern paradise, even though it was my first visit. What do I mean? It's vistas, the rocky shores, the treeless barren interior places, the bogs surrounded by black spruce trees and the extraordinary hospitality of the people all reminded me of my second homes in the eastern Canadian Arctic and sub-Arctic. I felt instantly at home in a place I knew well yet had never been. It was very special to be there for so many reasons.

Our trip began in St John's, but we quickly headed south to Witless Bay and Lamanch park where we parked overnight. In the morning it was westward to Eastport to visit new friends made through a common interest in the voyage of Wendy Killoran this past summer. The very essence of hospitality, they showered us, fed us and made us feel their cabin was our home. 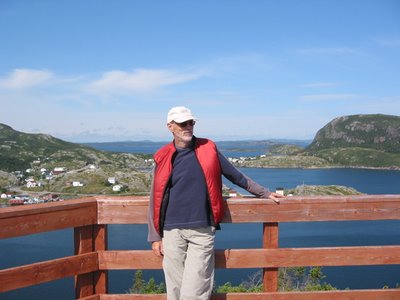 From there we went out to see Salvage, a nearby fishing town and photographic gem on the tip of the peninsula. What a place to paddle out of! Surrounded by bays, rocky cliffs and numerous islands and hiking trails, it would take months to explore the area by kayak and on foot. Winds were moderate, but growing the morning we were there, so we looked for a more protected spot to paddle in Newman Sound to the south. But here too, the seas were building and rather than risk a roll into freezing waters without adequate gear we put off paddling entirely and enjoyed hiking along the forested shorelines. Our friends had recently discovered a new hobby: collecting sea glass. These are bits of broken glass which the sea has slowly ground and chemically changed. People all over the world now collected and displayed these colourful exotica, made by man and shaped by the sea. 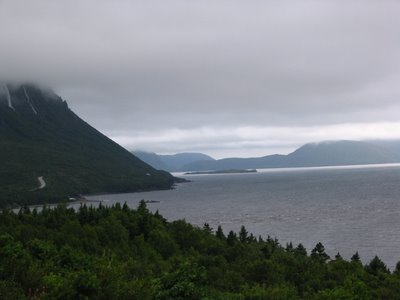 Our trip then moved to the west coast to visit other friends in Steady Brooke at the foot of Marble Mountain outside of Corner Brook. We drove in torrential rain most of the afternnoon, but the ever changing views kept us enthralled and the time passed quickly. The following morning, in spite the continuing rain, we drove out to the Bay of Islands where we had lunch at a park high in the hills overlooking the wind swept sea below. The clouds lay on the Blow Me Down mountains as we continued along the twisting road out to Lark Harbour, Bottle Cove and Little Harbour, all pretty fishing villages on the Gulf of St Lawrence. 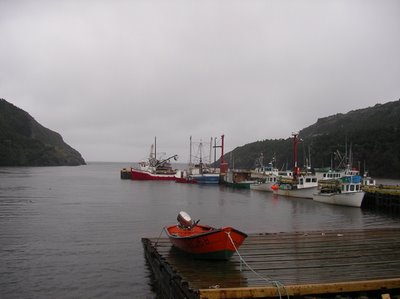 We were intent on a hike, but the driving rain and winds dampened our enthusiasm. No paddling outfitters locate in the area and besides the heavy pounding surf outside the harbours had us thinking of anything but paddling. Instead we slowly made our way back up the Humber Arm past Corner Brook and we began making plans for visiting Gros Morne National park, a UNESCO World Heritage Site where the Earth's mantle is exposed for all to see and hike upon.
Posted by Michael at 9:29 PM

these photographs are amazing, what a beautiful place, also it must be something to see the places and conditions Wendy has been paddling. it looks like a relly interesting place to explore. glad you had a good time and I look forward to more pictures.