One of the benefits of it having rained so hard for several days was that most of the mountain side streams were running full bore and pouring off the cliffs high above. We took advantage of this by hiking up a trail in Steady Brook which runs beside the Marble Mountain ski center. The falls at the top have a pool below the initial plunge which is a swimming hole when the flow is less intense. The day we visited, the high water volume made the pool suicidal to say the least. It wasn't even in the category used by extreme white water kayakers to pump up their adrenaline. Still the shear sight and thundering noise of the falling water made the place a worthwhile hike. 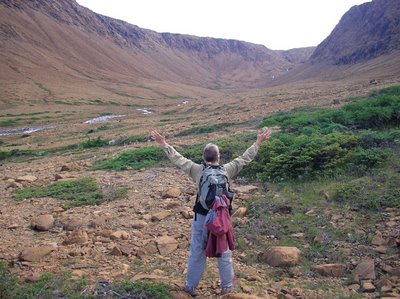 Later that day, as we made our way along Bonne Bay in Gros Morne Park, the road swung high up the mountain slopes giving us vistas of what was to come. Below, the various arms of Bonne Bay presented themselves as a kayakers paradise, with huge surrounding hills, shear cliffs, calm waters and intriguing coves. We began our visit to the Park on the southern side by visiting the 'Tablelands'. Here lies a huge chunk of rock, a mountain sized, chunk, in fact, which somehow got pushed above the Earth's crust when two tectonic plates collided at this spot in the distant past. It's barren yellowish surface immediately identifies it as different from the surrounding areas which are all either tree covered or show a greyish rocky colour. 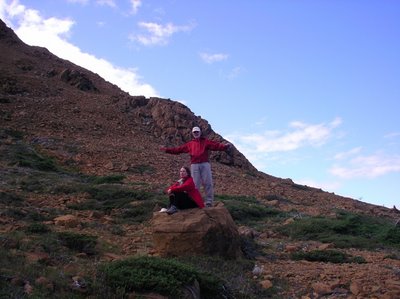 We hiked up through the Tableland valleys for several hours thinking we could easily be on Mars were it not for the running water and the odd bits of vegetation here and there. While the sun beat down on us warmly, the winds were truely Martian in strength: fiercely strong and gusty. At times it was hard to stand up straight, especially when trying to balance on loose rocks when crossing the streams coming down off the heights above. The experience of being is such an unusual environment was incredible. 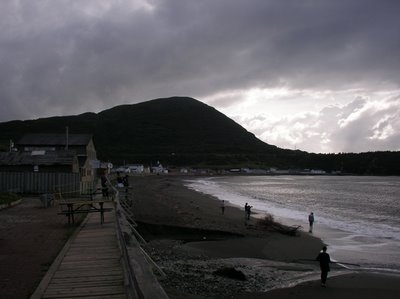 We headed for Trout River afterwards, hoping to get into the RV park for the night. By chance, we decided to check out the village first to see what was available in the way of a restaurant. After cooking for four in the tight confines of the RV for several days, we were ready for a meal out. Coming down to the street lining the sandy beach we spotted a parking spot beside a tiny park and pulled in. I walked a few meters along the beach front boardwalk to the Seaside Restaurant and booked a table. When I asked if we were bothering anyone where we were parked, I immediately exposed myself as someone from 'Away'. In Newfoundland, it seems, few people are hung up on land ownership and usage and as long as common sense is used, people feel free to come and go as they please. 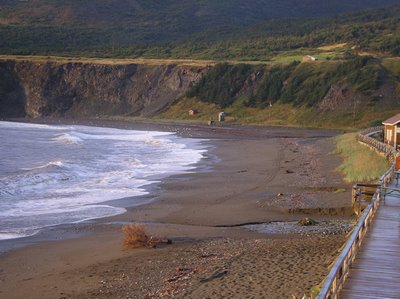 It turned out that the restaurant was actually famous and had been written up in several magasines. We enjoyed an excellent meal, drank local Newfoundland beer - I can recommend the '1892' brewed by Quidi Vidi - all with a view into the bay. To make things even more pleasant, a harp player added some Celtic aires to the ambiance while we ate. After strolling through the village down to the Trout river mouth working harbour and back, we retired to our beach front RV for the night. The heavy surf coming into the cove pounded all night, lulling us to sleep, filled with the knowledge that we didn't have to try and launch kayaks into it the following morning! In fact, it was easy to see why a paddler might want to stay and enjoy the village hospitality and resist the urge to paddle away too soon.
Posted by Michael at 2:29 PM

I am quite envious, it is such a beautiful place, and in the comfort of a vehicle too, I think you can get special roof carriers for the kayaks with lifters to get them up there. the idea of comming off the water and making a wee cup of tea has always appealed to me.