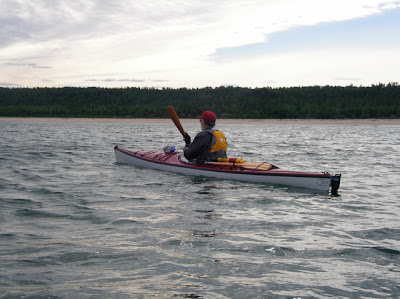 Paddling on the lower St Lawrence River in 2005
Last night I got a chance to 'relive' a kayak trip I never actually went on. Seems odd, but a few years ago I started out on this same paddling trip down the 'Lower North Shore', the part of Québec that faces Newfoundland. This coast was sparcely settled by Newfoundlanders who came across for the summer fishery. Eventually they built permanent homes and then a few small villages. It is a fabulous wilderness paddling area with wildlife, scenic countryside, and friendly people. Alas, my trip ended just before it really began as my paddling partner ran into some problems forcing our return home.

Last night I attended a film show given by 'Jean & Mario', two local kayakers who made the trip last summer. Their trip differed slightly from mine in that they took the supply boat part of the way down the coast to Harrington Harbour. They then paddled from there to Blanc Sablon, a distance of roughly 300 kms, which they covered in 18 days of paddling.

I enjoyed several aspects of their trip. First they were very self-sufficient, even making their own car-top kayak racks, sails and camera mounts. Next, they planned well, opting to go only an average of 15 kms per day to allow for bad weather and lots of sight-seeing along the way. Finally, they chose to make a video record of the trip rather than a slide show. Not that slides are bad, but by using video, one instantly gets movement and sound which I find added greatly to the 'feeling' of excitement they experienced. This was so apparent for example, when whales surfaced so close to their kayaks that you could see their breath and hear it too. It was very much like actually being there.

So, this trip is not only still on my places-to-paddle list, but I've moved it back up a few notches. Having 'relived' the trip in a two hour video presentation and speaking with the two paddlers, I'm all excited about this trip again. I really want to go! Now just where am I going to fit it in...?
Posted by Michael at 10:57 AM