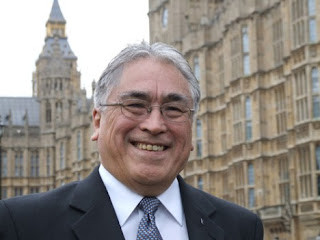 Aqqaluk Lynge is a Greenlander well known in circumpolar forums. He has recently published a book of his poetry some of which go back over 35 years of his life.

His press release says, "The poems rely on strong images drawn from traditional life, the people and the geography of the land he loves so dearly. Greenlanders have survived many changes and now not only have their own government but also a thriving modern society which is slowly overcoming the hurts and limitations of colonial times. The revolution is not quite over, but there is no longer any doubt that Greenlanders, the land and the culture they love, will survive. Aqqaluk Lynge has combined poetic imagery with political action to become one of the most influential Greenlanders, both at home and abroad."

If you're interested, Aqqaluk's books can be had by following the links located here.
Posted by Michael at 1:51 PM

Thanks for this Michael, I will follow this up.

Interestingly, in Scotland, the crofters are trying to get recognition and autonomy as an indiginous people of the highlands and the islands. Having their own language does strengthen their case.

Whoops link to above here..

Michael, you are a treasure, inasmuch as you bridge a gap that brings traditional knowledge to us. thanks.