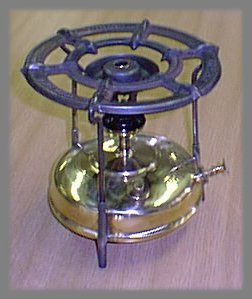 The first year I went out to stay in the Iglulik hunting camp, I had a local lady make a tent for me. I bought yards of canvas 'duck' at the Hudson's Bay Store, enough for what was called a "3 panel" tent. That meant the length of the tent would be three times the width of the material. For the next several days, the lady's living room was a billowing sea of canvas with she and her hand-cranked Singer sewing machine labouring away in the center. I couldn't figure out one end from another and was certain I'd made an expensive error. Miraculously however, on the third day, a perfect tent rose from the sea of cloth and we dragged it outside and put it up. I was completely amazed at this incredible feat. It even had extra material at the corners where sled dogs tended to lift their legs at times.
I lived in that tent the rest of the summer and used it again the following year. The first year, like all the other dozen or so families camped at Iglulik, my tent followed the traditional Inuit floorplan. That is, I got some winter caribou skins and laid a double layer across the back end of the tent floor. This formed the sleeping area, with heads facing inwards. I put a piece of driftwood across the center of the tent to mark off the sleeping area from the area used for storage, cooking, and so on. And I had a dirt floor. That first year, wooden tent doors were the rage, so naturally, I eventually acquired one of these as well.
The following summer, camped in the same place with most of the same people, much had changed. The first noticeable item to change were the winter skins. Instead, many people began bringing out their bed mattresses from town. No more breathing and drinking caribou fur while at camp! Next to go were the quaint Primus stoves. These old fashioned, three legged, single burner, brass wonders were replaced with Coleman campstoves. The wealthier purchased the three burner versions and kept their tents good and warm both for themselves and their visitors. Finally, the wooden doors all disappeared and were replaced with more modern and bug-proof zippers.
I was sad to see the old traditions getting swept away so quickly at the time, but on my last visit to Igloolik - that is, the town - we drove (yes, they have a road now!) to Iglulik - that's the camp - and I was shocked to see a cabin going up. No more camping. I bet the place looks like any other cottage area today. It probably even has its own baseball field, maybe even a convenience store... 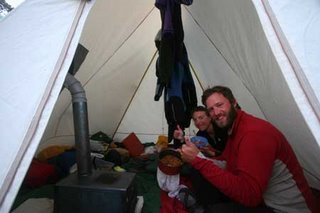 So when I saw Amy and Dave's setup for their kayak trip around Lake Superior, I wasn't too shocked to see their huge tent and colossal stove. As you can see in the picture, it's sure to attract lots of visitors and I imagine the home-baked goodies they'll be producing will change kayak-camping forever around the lake. I just wonder how they cram all that stuff into their boats...
Posted by Michael at 11:32 AM

I think on a long trip you want all the comforts you could get, dont see how the stove fits in though, they have a video clip link of them packing the boat but my connection is too slow, it would probably take half a day to load! if I get the oportunity I will try to have a look on a friends broadband connection.

I suspect they have some sort of shore based backup for this trip. There's no way that stove fits in a Solstice kayak. I too have a slow connection so won't be seeing the video any time soon!