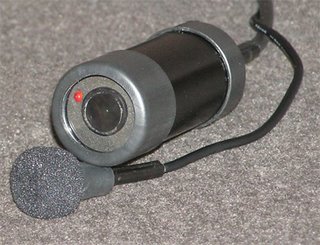 A lousy, cold, rainy day. It's Ernesto on his (its?) way by. I don't mind. I've things to do, like put the video film clips I took while in Newfoundland into some kind of edited order so the final film is interesting, exciting and 'tight'. I enjoy this editing activity, especially on a day like today when being outside is a bit less than fun.

I enjoy the almost god-like ability of going through the film clips, removing this and that, playing around with the order to see which is most effective and so on. If one could only do this with our lives, imagine what we'd have ourselves doing? I'd definitely trash a few of my life clips, but there's lots of others I would put on replay over and over again. At my age, I've accumulated a goodly number of both types. Certainly this trip to Newfoundland has a lot of those 'replay' clips.

The picture at the top is of the camera lens used by Justine Curgenven when filming her TITS videos. It's waterproof and is attached via a cable to the recording device inside her kayak. The lens you see rests on an adjustable arm which she can quickly position anywhere using a suction cup device. Very cool! Perhaps something like this ought to be my next acquisition...
In the meantime, I've got some film editing to do and I'm only just on day 4 of the 10 day voyage!
Posted by Michael at 3:21 PM

good luck with your editing. I have a little mini-movie function on my camera and while it is not producing the best quality picture it is really nice to look at he memorys.
if there was a kayak trip to edit I think it would mostly be the gossip that would be edited out, we went out in flat calm on Monday night and stayed out till it was dark, watching the cloud patterns int the sky turning red, all chatting about life the universe and eveything. very relaxing.