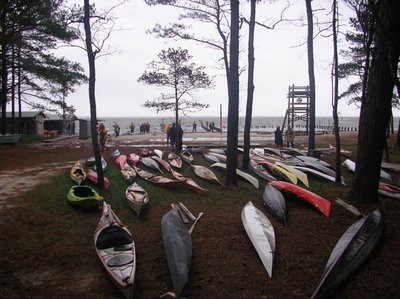 The annual Greenland kayakers retreat this year had two very different faces. The first face was heavy winds and driving rain which kept all but the most experienced off the water. The storm surge at one point buried the dock itself underwater and threatened to invade the trees above the beach. Those who did get out were happy to discover their storm rolls actually worked in heavy weather. Others discovered that Greenland paddles worked well with the camp SOT boats which were employed as surf boats. No kayaks were left on the beach for fear they would become airborn. Instead they littered the forest floor like giant fallen leaves.
Fortunately on both Thursday and Friday I had signed up for off-the-water activities so was not too disappointed to be beach bound. On Thursday I made a pair of neoprene mitts, custom fit to my hands. On Friday I enjoyed an all-day session on surveying and lofting small craft. We used a Greenland kayak as our model and learned how an experienced person like Harvey Golden goes about measuring and drawing kayaks around the world. We also got a sneak preview of his book due out next month. Yes, buy it!
Thursday and Friday nights many tents slowly succumbed to the wind and rain forcing their owners into the few remaining cabin bunks. I was lucky. My tent was well up to the task at hand and kept me warm and dry throughout the ordeal. 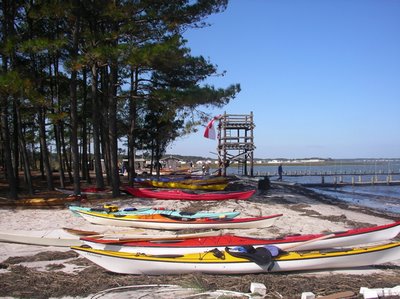 Sunday the weather finally broke to reveal the second face of Delmarva, the boats moved out of the trees and onto the beach. Everyone was able to get out on the water in warm sunshine at last. I was happy to learn that doing balance braces and sculling braces in the still wavy conditions were within my meager ability level in my stubborn QCC which has resisted being an easy rolling boat for me in the past. Having expert and patient help has no equal in acquiring new skills, and I had both in ample amounts.
Sunday night the few folks remaining enjoyed a clambake and bonfire on the beach while an orange harvest moon slowly rose from the water and hung in the night sky as we joked and passed away the last of a great weekend.
Posted by Michael at 9:45 PM

brr... looks chilly. I love seeing all those boats together, looks like a good gathering. am impressed you made your own pogies! are we getting a photo of them?

Been seeing so much about this & of course I wish I could've been there to test myself in the storm. Haven't been out in challenging conditions in far far far too long.

I was constantly wishing I was on the other side of the dunes for 9 to 13s ;-)

It's true that Delmarva delivered everything in spades... wind, good company, fun, expert mentoring, great programs --- and great videos :). I am glad to be among the fortunate whose tent withstood the gales and whose qajaq seemed just fine with the waves! Was good to see you again.