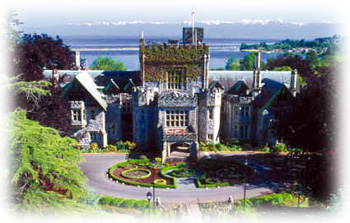 I discovered tonight - Halloween, of all nights - that my castle is haunted! That's it, in the picture: Hatley Castle. Yes, it's true. They had some paranormal people in to check and they know. They have films and sound graphs and all sorts of other dreadful ways of telling. Very creepy.

I had had fond hopes of one day paddling in the Vancouver Island area of British Columbia. Now I don't know. I walked past that church in St John's last summer and watched as tourists entered. I had tingles up and down my spine and shivered in the heat. They were going to walk past that veiled Madonna, probably in total ignorance of what they were doing. I didn't even enter the building. Would you?

Now Derrick says that Tasmania never happened, and probably a bunch of other things didn't either. I can't wait for tomorrow when all this rubbish will pass and we can paddle in peace again.
Posted by Michael at 7:24 PM

This page is fantastic, what you show us is very interesting and important, do you want to see something more? Look: Great investment opportunity in Costa Rica: hotel in jaco beach, jaco beach review, apartment beach jaco rental. Visit us for more info at: http://www.jaco-bay.com/