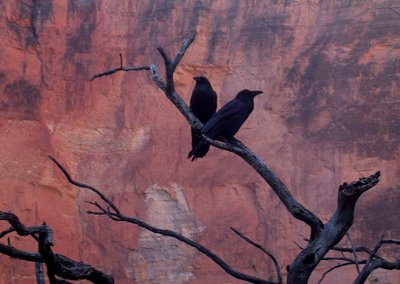 I've always been fascinated by ravens. The book I'm presently reading, 'North to the Night' by Alvah Simon is a case in point. The story is about a man, driven by adventure and consumed by a never-ending desire to test himself out 'there'. He has not been able to satisfy himself even after a dozen years of sailing around the world and pushing himself through jungles, across deserts, into tropical illnesses and who knows what all. Then the arctic draws him in. He sets out once more, the 'final trip' with his somewhat reluctant wife, but through a twist of fate, he ends up facing the arctic winter alone, 100 miles from the nearest community, his steel hulled 36 foot sailboat iced into a tiny bay on Bylot Island. Sounds perfect, doesn't it?

The first month living with himself wasn't too bad. He had a pet cat and the prowling polar bears helped to set the pace. The second month, when the sun no longer rose above the horizon, started to see some changes. I suppose every solo adventurer out for a month or more would feel a kinship with Alvah. His moods began to rise and fall like the wind. The cat started to have doubts. Strange things seemed to happen which he couldn't explain. Then he noticed a raven, perched on a solitary rock in the darkness up on a hill overlooking the bay. It was watching him. As he days pass, Alvah loses track of time, his ability to think clearly slowly ebbed away. He talked to himself, to the cat, to the boat. His dreams became nightmares, repeating endlessly, always the same, but with new and more frightening twists and turns. There was little comfort in his icy prison. Still, no matter how bad it got, the raven watched and waited. Perched on its rock high above the boat, it seemed unchanging yet always changing. It almost seemed to know T.S. Eliot's lines long before Alvah did,

We shall not cease from exploration
And the end of all our exploring
Will be to arrive where we started
And know the place for the first time.

And so it is, no doubt for many people who yearn to get away and paddle long distances by themselves. They seek the horizon of their souls, the depth of their beings, the swirling spirituality many of us discover waiting out there in the wilderness. Yet on coming back home, we suddenly find ourselves back where we began and oddly empty. Like Alvah returning home, he soon found he needed 'one more trip' to fill whatever void it is that pulls and tugs and irks until the next trip begins. Only then do we start to realise it is the trip, not the destination we seek. We've already been to the end. We realise the raven wasn't watching. It was just there for the ride. There was no destination, no void, nothing.

I still like ravens. I love what they are and what we think they are, even what we make believe they are!

well I'm not a lone paddler but a bit of quiet time alone is good. I prefer to spend it somewher warm though!
have you done any long solo trips?

The longest trip I've made solo was about 2 weeks in length, but I was only totally alone for about 5 of those days. The rest of the time I was with other people although I didn't know them. It was certainly interesting being alone completely. I actually enjoyed it, but I was always busy, paddling, camping, walking etc. Alvah didn't have much to do in the arctic night and I think that is deadly...