See and Be Seen 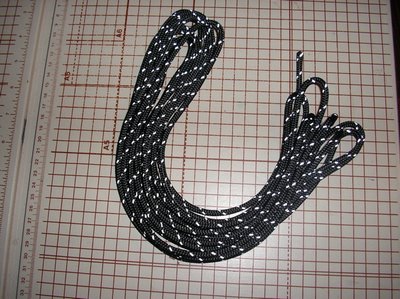 Now that the days are so much shorter than they were in the summer, it isn't unusual to find myself paddling back to the put-in at dusk or even in the dark. While I carry a light in my PFD and I'm almost always the only boat on the water at this time of year, it's always healthy to be as visible as possible. With that in mind, I recently came across an item which helps me stand right out on the water.

I'm talking about line which has a built-in reflective material woven into itself. It makes ideal decklines for a kayak. It's available in several colours and under a number of brand names, but mine is called 'Niteline'. 'Glow Cord' is another brand I've seen on-line, but not in local outfitting stores. It's relatively expensive at about $5.00 Cdn a meter, but well worth the extra visibility it provides on the water. I bought the 4 mm line, but I gather it comes in various widths depending on your needs. Removing my old decklines fore and aft, I replaced them with the new line (BTW, having a helper work with you to get the line sufficiently tight is highly recommended). Voila, instant kayak outline. It looks really cool in the water.

Next time you're out on the water in the dark and see some kayak shaped string floating by, say hello. It might be a lost kayaker looking for the put-in!
Posted by Michael at 8:48 PM

Good suggestion Michael. I've not only have used the reflective line, but also have reflective tape on my paddle blades, boats, pfd, helmet, dry suit, and paddling jackets.

If one doesn't have a partner working with them, a pair of vise-grips make for a good "third-hand" when installing decklines.

sounds like a cool idea, I've never replaced deck lines, the boat is about 8 years old now and mine still seem ok. we use personal headlamps or glow sticks out in the dark at the club, the coastguard is just along the esplanade so we don't like to get in trouble!!

Derrick,
Highly illuminating! That's a brilliant idea though I have not seen the line over here.

If you knew what you were doing, you wouldn't be a lost kayaker looking for the put in!