Winding Down the Days 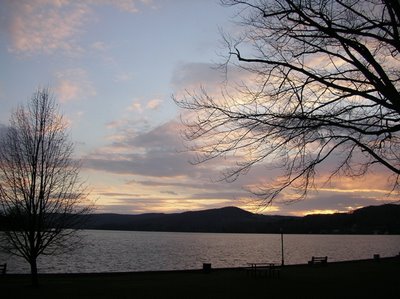 I took this photo yesterday. It's Lake Massawippi, where I first paddled a kayak about 10 years ago. I was in an outdoor store in a nearby town and noticed they rented kayaks. It suddenly hit me. I want a kayak! I began renting their various boats and finally settled on a yellow and white Boreal Design 'Alvik', a walrus. The following summer I took the boat with me to Nunavut and went on my first expedition paddle, from Hall Beach to Igloolik via the Ooglit Islands out in Foxe Basin.

Thinking back on the adventure I was probably totally crazy to have done it. I had no protection had I capsized. I didn't have anything to bail out the boat with. I only had a single paddle. What I did have was some local knowledge of the area having spent two years hunting with Inuit along the same coast and offshore. I also had a secret weapon I only found out about after the trip was over. I had told the police what I was doing and roughly how long it would take. A good friend also saw me off. She had come down from Igloolik to surprise me. Once I left Hall Beach, she told every Inuk traveling along the coast to quietly watch out for me. They all did, but in such a way, I never saw a soul. About a week later when I arrived at a fishing camp, they immediately got on the VHF radio and let people in Igloolik know that 'Mikusi tikipok', I had arrived. That was the first hint I'd had that I was in caring hands, a complete stranger to most of them, but someone to watch out for and take care of nonetheless. The police in Igloolik had no idea I had done the trip. They hadn't been alerted by their colleagues in Hall Beach as I had supposed they would be when I filed my trip plan.

I often think back to those people and what they did for me. I owe them a very big debt.

Today, the lake is slowly losing it's accumulated summer heat. In a few weeks, the water will be 4°C from top to bottom. The surface water will continue to cool, but being less dense it will remain on the surface. At zero degrees, the surface will start to form skim ice around the shorelines, especially in the quiet bays. This ice will gradually grow out to the center and cover the lake. Or will it? In recent years, the ice has not formed as thick and solid as it once did. I hear the same story in Igloolik as well. And the fish stocks are winding down as well. Mmmmm....
Posted by Michael at 2:36 PM

Thanks for the story, very interesting.

I think thats lovely, all those people looking out for you.
also you weren't worried because you had no idea of all the millions of things that can go wrong, so none of them did.
we haven't had any ponds here freeze right over for many years, I remember playing on the ice about 30 years ago.