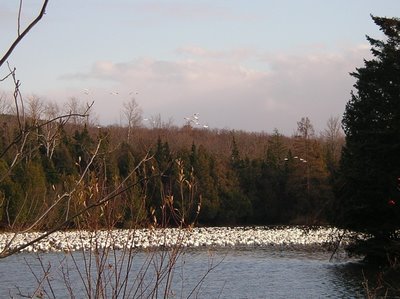 I sometimes imagine that most of the birds we see these days are new species invented since the time I was a child. Back then we only had robins and perhaps a few chickadees. For some reason, I don't recall there being other kinds of birds when I was young. Of course, there were sea gulls at the ocean and a few geese that migrated far overhead and so they didn't count. Today there are lots of birds. At our house alone we have recorded 82 different species seen over the past 30 years or so. This is a remarkable increase in the number of species invented since my childhood! Or so it seems.

I drove down a back road the other day, taking a short-cut to the garage where I get my winter tires put on. Along the way, there's a pond bordering the woods and glancing over as I passed by, I was shocked to see it covered in white. Ice already, I gasped? But no, the pond was covered with snow geese, a mostly white goose with black wing tips. More circled in the air above. Years ago, one had to go down river from Quebec City to see snow geese. Now I have them almost in my back yard.

The birds brought to mind a Spring time when I was wind-bound in a small cabin over-looking the St Lawrence river. We'd tried to launch our kayaks into the wind and waves, but it was just too wild, so we folded our tent and rented the cabin. We spent a few hours watching the waves pound the rocks a few feet from the cabin door and every now and then a few snow geese would beat past, only inches above the waves. It was a special time with great memories of paddling, whales, people and fun. Seeing the snow geese so close to home brought all those good memories back and made my day.
Posted by Michael at 9:16 PM