Liking it Grey, Cloudy and Wet! 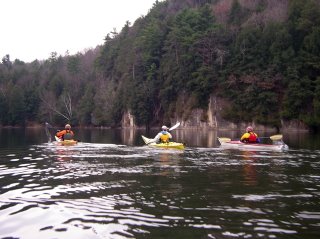 Four of us spent the weekend paddling on Lake Champlain. We began late in the afternoon on Friday and returned under the stars. I haven't done a lot of night paddling, but I'll do more. It's a special time to be on the water, reminding me of my childhood days.

Saturday we were back on the water under grey, cloudy skies, high winds and threatening rain. We opted to stay off the lake itself which was kicking up some good sized waves and instead we explored the Lamoille River in Vermont. As this weekend was a 'get-to-know-each-other' exercise for the group, it proved to be a good choice as the river banks kept us relatively close together and talkative. Before long, we got comfortable with each others paddling skills and capabilities. The upsteam dam appeared just before lunch, forcing us to head back the way we'd come. Having put in part way up the river, we then paddled out to see what was happening on the lake. The wind had switched into the north and now had the whole length of the lake to work on building even bigger waves.

Sunday was another grey, cloudy, windy day so we put in on Mallett's Bay, again on the Vermont side. Heading out towards the lake once again proved to be rougher than we were willing to work with so we surfed back into the bay and made our way over to the far side to check out the cliffs and fancy houses. We rafted our boats up together for lunch by using a cord one of us had made up for that very purpose. A simple arrangement, it consisted of a length of cord with a clip on either end which we hooked onto the guylines from one boat to the other just ahead of the cockpit. Not having to hang on to each others boat as we drifted about gave us time to enjoy our shared lunch and hot drinks! 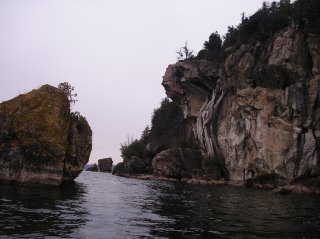 Our final outing on Monday morning was - you guessed it - another grey, cloudy, windy day. We launched from North Beach and for the first time got out onto Lake Champlain proper. It was still windy and rough, so we crept around each headland carefully, testing our skills in the waves before committing the group to the next section.

The weekend was designed to see if we were up for a multi-week trip planned for the summer, so non-paddling time was spent pouring over maps and discussing logistical problems. Unless we've missed something, it's looking good-to-go for August. Meanwhile, it's back to work for all but me. I'll have to manage as best I can given I no longer have a day job to keep me out of trouble.
Posted by Michael at 8:30 PM