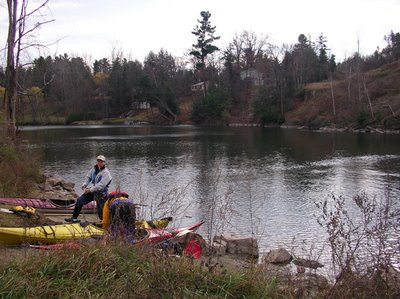 Saturday the main body of Lake Champlain was being swept by cold north winds. These blew down the length of the lake producing large breaking waves which looked distinctly nasty. We decided to paddle the Lamoille River instead and put in from a little Cul de Sac north of the first bridge. This was an easy carry down to the water where a tiny sand beach lay. 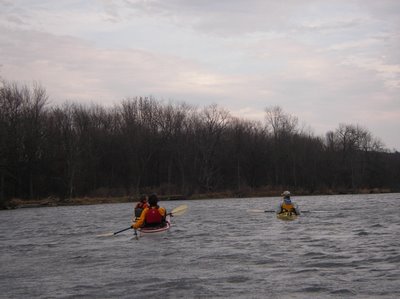 Now and then brisk winds help to push us up the river faster than the current could work to push us downstream. The banks varied back and forth from cliffs, to corn fields and open woods. 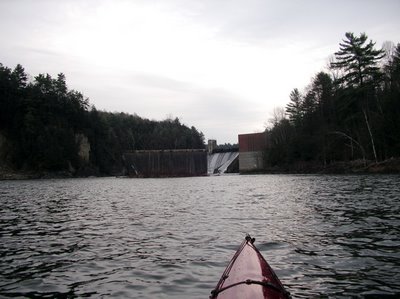 After an hour of paddling we came to the dam where we played in the current. The shallow water prevented us from reaching the dam itself, but we enjoyed playing in the eddies and being swept into the currents. 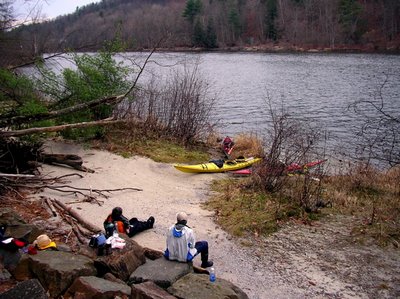 After lunch just below the dam, we returned to the put-in and then continued past it downstream to the river's mouth. However before doing that a bit of kayaking humour was staged by threading one of the boats through a tree along the river's edge. I guess some people will do anything to try and get on the back page of SeaKayaker magasine! 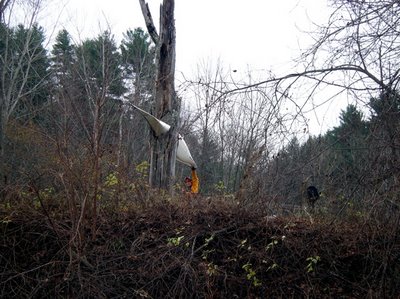 On the way downstream, we played tag with some Great Blue Herons and saw deer in the woods. At the mouth itself was a turtle sanctuary where landings during the summer is prohibited. After playing again in the windy conditions out on the lake, we returned upstream to the put-in. In all, we spent four hours in our kayaks on a day when most people stayed indoors out of the cold, wet and eventually, the rain, which began just as we loaded up our boats on our roof racks. Perfect timing.
Posted by Michael at 12:30 PM

great pictures of your trip, looks chilly indeed but you have my admiration for going out in it!!

love the pictures of you all out for a walk in your 'orange don't shoot me' gear!