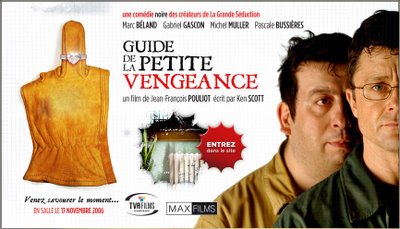 The haunting continues! In an almost perverse twist of fate, Jean-François Pouliot has titled his new film 'The Little Book of Revenge'! What's with this? Readers may recall my post of several weeks ago about the disappearance and ill luck which followed me in the wake of watching the DVD version of Pouliot's previous film 'La Grande Séduction'. Well, this is his next black comedy and I'm almost afraid to read the title, let alone view the film.

I didn't think I was the kind of person who would serve anyone a big platter of revenge brownies, but I suppose, I'd be less than human not to think about the possibilities. Revenge is said to be 'sweet' if not exactly nutritious. I'd dearly love to extract a few pounds of flesh for the wrongs done me, but if the truth be told, I'm too lazy to bother. And I'd probably burn them anyway.

I think I'm better off to take Wenley's advice and become a Bond, James Bond fan and head out to see the new 'Casino Royale' film. At least it deals with the known world and not the haunting of my soul! So take my advice, as good as this "Revenge" film probably is, avoid it if you're a paddler, especially the DVD version when it comes out!