Before the Rains Come 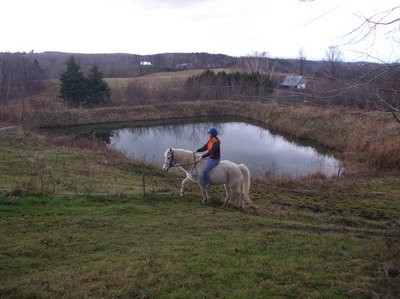 The winds blew out the power last night so we all woke up late. During breakfast we realised that the outside temperature was almost higher than it was inside! Normally we expect mid November to be in the area of 5°C. It was 18°C when we were having breakfast. The winds were still high, with scudding clouds under a pale blue sky. Clearly it was time for a walk on our east ridge behind the house, before the rains came.

My daughter chose to take 'Maggie', our pony we'd taken to help out a friend who'd lost their barn. We still have her, years later and now own her. We headed up past what some in our family call the 'Pond', but which is obviously my 'Rolling Practice Pool'. From there, we cut through the fence line into our neighbours corn field. From a distance my wife signaled the dog to head towards the next break into a hay field. We wondered whether either of our neighbours worried about out 'grooming' the cut so we could ride and ski more easily. We decided they probably didn't mind. They've never said anything and we had made an arrangement with the mother of the present owner years ago. In the country, these agreements quite commonly last for generations.

Next we passed the 'Dinosaur Nest', a large pile of rocks cleared years ago from the hay field where my children used to play. They had hollowed out a depression on the top of the pile to create the nest when they were young and the name stuck, as names will when you live in a place for any length of time. My wife asked if I'd seen the letter to the editor in the local papper written by someone named 'Pix Butt'. I had. I guess the editor either missed it, or has a decent sense of humour. Names! 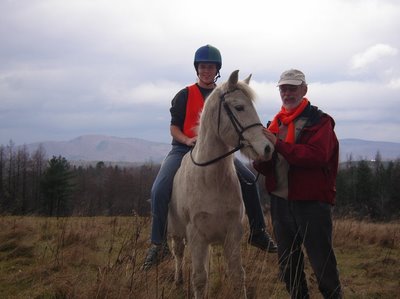 We continued walking and soon crossed over into the next field and admired the view before heading into the woods beyond. All of us dressed for hunting season, even the dog.

Clouds were building overhead and rain squalls appeared against the western horizon. It was time to head home for lunch. As we put 'Maggie' in the barn, the rain began. I headed down to the house to click on the propane fired 'wood stove'. It was time to think of something to put up on my blog today.
Posted by Michael at 12:28 PM