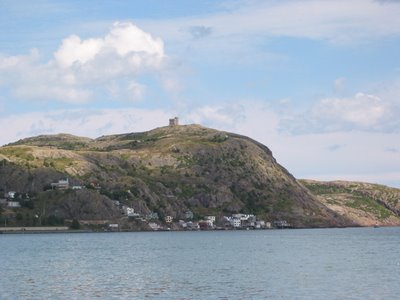 Anyone who has been to St John's, Newfoundland will be very familiar with this view of Signal Hill, It's a national treasure for several reasons. It has been used for signaling as far back as the 18th century when flags were flown to warn ships of weather and other sea hazards. A tower known as Cabot Tower was built on it to commemorate the 400th anniversary of John Cabot's visit to the area in 1497. More recently, Marconi used the hill to receive his Morse code radio signal from Cornwall, England in 1901.

Remarkably, the hill and surrounding lands have remained close to their natural state all these years in spite of being within easy walking distance from the city of St John's. This Fall, that began to change when a 'benefactor' took it upon himself to 'improve' a natural fen located on the hill. This was done with little or no consultation and without obtaining the usual permits. Obviously this is no way to proceed in a democratic, modern society and a number of people in St John's want the work halted until a proper environmental plan can be drawn up. So far, they have not be successful.

This may not seem important to kayakers, but it is. Whenever someone or some group decide to 'improve' a natural setting, kayakers who seek wilderness paddling lose a place we think of as sacred. The more wilderness we lose, the more we reduce our ability to save our world and by extension, ourselves. The fewer natural places we have in which to paddle. Remember, Thoreau's famous line, "In wildness is the salvation of the world", was not an idle thought, but the very essence of our paddling experience.

You can join the growing list of petitioners asking that work be halted on Signal Hill by clicking here. Remember, it may take many tiny drops to fill a bucket, but when it overflows, people take notice!
Posted by Michael at 9:46 PM

do you think its ok to sign the petition if I'm all the way over here in Scotland?
its true we need to keep our wild places, Scotland may seem to have some wild and wooly places but theres barely an inch of it that hasn't been altered by man. Once-Upon-a-Time it was covered in trees. . . and its all down hill from there!!
Love your caves photgraphs, is the monster 'Champ' one of your local legends?

Claire - by all means, sign the petition. It is important that people see this is more than just a local issue. 'Champ' is only one of several local monster myths which abound. I suppose Scotland's Loch Ness is the grandaddy of them all, but he (she) has offspring everywhere!

Here's what I said -

"I may never make it to Signal Hill, but this sounds like just the sort of place that no matter how good the intentions, the work shouldn't be done without proper review & an open process that gives the locals a say!"

Thanks, Claire and Bonnie for posting a comment. It's appreciated!

You only say good things Claire and Bonnie because you don't know what kind of asshole he really is if you cross him wrong. Watch out...he will stalk you relentlessly.