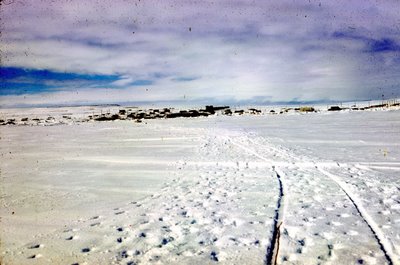 This weekend's paper had an advertisement to travel to Igloolik in January for the Return of the Sun ceremony. If you were in Igloolik today you'd find the 'day' becoming increasingly shorter than it was even a few days ago. By early November, the sun will no longer rise above the horizon at all. Instead all you'll see is a pinkish blush on the distant southern horizon around noon. The rest of the 'day' will be lit by star and moon light. In fact, this light arrives in sufficient intensity to carry on most normal outdoor activities thanks to the reflection from the snow and so on. In mid-January the sun re-appears above the horizon at noon and the Iglulingmiut celebrate that arrival with a ceremony and a feast which the whole town attends.

Conversely when the picture above was taken it was early June and the sun circled the sky, never setting at all. We enjoyed the freedom the light brought as it enabled a person to enjoy the outdoors 24 hours a day. There was no mention of, "Let's leave in the morning." A person could leave anytime as it was always light. It did mean that people would sometimes be asleep in the middle of the day, as it were, and one would have to wait until after supper to go out hunting or whatever.

On a nasty, cold, sleet filled day like the one I'm presently 'enjoying' it would be nice if I could get away with returning to bed, knowing I'd be able to head out paddling tonight when it was nice and sunny outside!
Posted by Michael at 1:20 PM

yuck , horrible weather! and I hate it getting dark in the winter, I dont think I could cope with perpetual night-time.
photos of your horses would be lovely, working or not!