First the Test, Then the Lesson

Spring time in the arctic means the return of the migratory birds. For them it's time to begin nesting, but also it's time to renew flight feathers in preparation of the trip south at summer's end. 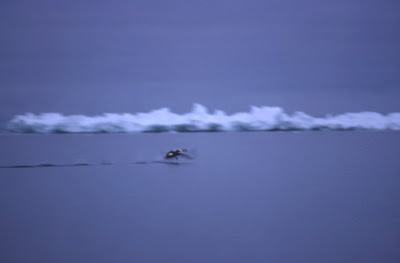 In this picture, it wasn't just the photographer who's having a shakey day! This king eider had shed many of its primaries and was unable to take off. At best it would lift a meter or so on the water only to plunk back down again and flap madly along the surface.

The lower picture is of an arctic loon out in the ice fields, enjoying a calm day, out hunting like we were. I had a few interesting experiences 'hunting' ducks during this period of semi-flightless birds. One day, while following along the sena - the sea ice edge - in the canoe, we came across a large flock of eiders on the ice. Realising they would have trouble taking off, we quietly landed behind a nearby ice ridge. Sneaking over to them, we then burst into view and began chasing them down and catching them by hand. 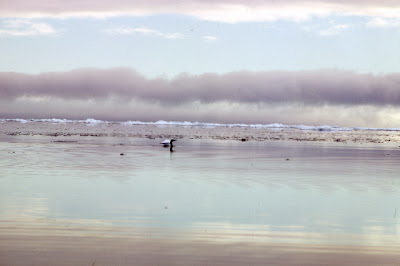 What I didn't know was the particular patch of ice they were on was partly rotten and covered with a thin layer of fresh snow. Running full out after a duck, I suddenly went through the ice and plunged into the freezing water! I thought I was a goner! I dropped into the icy water up to my thighs, but then stopped. There was another ice layer below the one I'd broken through, which had stopped my death plunge! I climbed out and looked around. Rather than rush to my aid, I saw I was providing the moment's entertainment. Everyone was laughing. Had I disappeared totally, they would have rushed to save me, but given that hadn't happened, laughter was deemed the best response. My antics were retold to every visitor back at camp, complete with the shocked face and pathetic look.

It was also expected that I catch the bird I had been chasing as well. A soaking wet hunter is one thing, but an empty handed one is much, much worse. I learned several valuable lessons that day. Hopefully I won't need the test again in order to relearn them!
Posted by Michael at 11:52 AM

that must have been a scary moment, but nice of your companions to laugh and make you the story of the day!
I have seen, on the television, documentarys about global warming and the complete melting of the polar ice, what will all the animals do then? its sad, more species dissapearing.