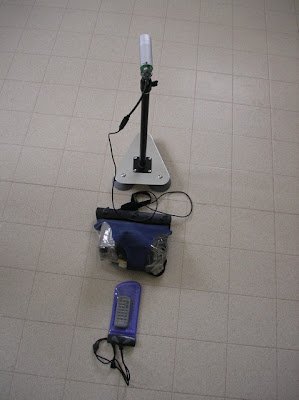 Video recording with the Viosport waterproof lens proved to be a bit more complex than I had assumed when I first purchased the unit. To begin with, the whole unit is not fully waterproof, only the lens, the cable and the microphone have this feature. The connections to the recording device - in my case a mini DV recorder - are not and that's a problem. Here's how I got around that reality while in Florida:

In the picture on the left you can see the silver lens cylinder mounted on the Sticky Pod" extension post. A cable leads away from the rear of the lens first through a waterproof connector, then to a microphone (the bulge just in front of the blue bag). At this point, one must connect to the recording device. How this is done depends on the camera or device being used. However in each case, the connections and the recording device need to be protected from the water. I used an AquaPac bag large enough to contain my camera and the battery pack required by the lens.

In order to shoot video, I'd mount the lens on the kayak deck, place the battery in the AquaPac and set the camera up to begin shooting. Then I'd seal them both in the Pac. The flexibility of the Pac allowed me to turn the camera and battery pack on and off easily. The camera also needed to be set up to record from the remote lens, a procedure similar to recording from a VCR or TV. Again the flexible Pac made this relatively easy and didn't require me to get anything wet in the process.

With everything turned on, I was ready to film. I would use the camera's remote - sealed in the separate, smaller AquaPac at the bottom of the picture - to turn the camera's record button on, off or pause with everything staying dry. The straps on the AquaPacs allowed me to stow the larger one under bungies on the foredeck and the smaller one I could attach to a ring on my pfd where it was easy to grab.

Needless to say, this arrangement was somewhat clumsy to use at first, but I soon became adept at manipulating things and was able to record with it. Ideally, the whole unit would be totally waterproof with an instant on/off feature to capture action without the involved procedure I had to go through. However, for the relatively modest cost involved, the results are satisfactory. Since returning home, however, I have discovered another, and even cheaper, device which may be worth looking into. I'll save that for another post!
Posted by Michael at 1:55 PM

That sounds like a very good setup. I use something similar but found a company in CA that will install watertight access ports to an existing Pelican box, etc. I'll be happy to give you that information if you'd like.

How did you attach your lead from the Viosport through the Aquapac and keep it watertight?

Look forward to seeing some of your video online.

Steve - This is perhaps one weak area as I just crunched the AquaPac tight around the wire... Not ideal in rough stuff and hard on the wire itself, for sure. I'd love to know company you refer to as I'm constantly looking to improve this rig.

thanks! I am also thinking of having some recording device on board my kayak. A handheld video-camera seemed quite troublesome to handle, particularly if I need quick shots.

I used to use a similar setup ("helmet" cam with a camcorder as recording device in a waterproof case). My camera appeared to be not exactly waterproof and had to replace it.

However, recently, I am using Pentax Optio W10 to shoot my paddling video clips. It is much faster to setup, especially, in a racing kayak and it can be used as a helmet cam or mounted on a deck with a sticky pod. Maybe, I shoot compare by video recording devices ...

Anyway, have fun with your video setup and we would like to see some movies now!

I sent you an email with all the information of the various gear I've used. Hope it's of some use.