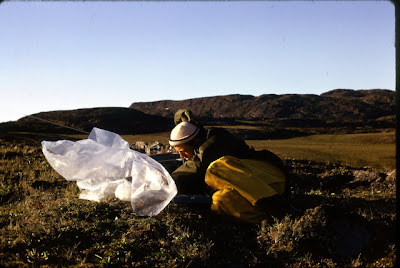 During the summer, we arranged to have supplies flown to us from time to time by bush plane. The communication was done via a SSB radio we set up on top of one of the hills close to the camp. The picture above is not of a solo adventurer up to no good, but rather my boss attempting to reach the bush pilot dispatcher in Cambridge Bay with our food order. We had pre-arranged a code for things the government wasn't willing to pay for, so it was important that a 'case of beans' on the order sheet didn't actually arrive, but got switched for what we really needed. All very tricky, but northerners have long learned to survive in adverse conditions and we always got the beer we ordered. 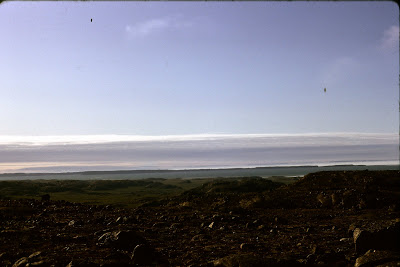 From the same hill-top we could get a view downstream and see the lake's outlet at the sea. We hiked down there for a week in August to see what barriers existed in the river, if any, as well as to do some sampling. It was a thrill to be there, made doubly so later, as I discovered that Sir John Franklin had camped in the exact same spot on July 24, 1821 as he made his way along the coast in two canoes. This is what his comments were while there:

At seven, a thunder-storm coming on, we encamped at the mouth of a river about eighty yards wide and set four nets... The nets furnished only three salmon-trout (char). We attributed the want of greater success to the entrance of some seals into the mouth of the river. This stream...discharges a considerable body of water. Its banks are sandy and clothed with herbage... The rocks here consisted of a beautiful mixture and red and grey granite, traversed from north to south by veins of red felspar, which were crossed in various directions by smaller veins filled with the same substance.

The idea that I'd camped in the exact same spot as Franklin and that it still looked much the same 146 years later, did much to instill in me an interest in his subsequent voyage to search for the elusive Northwest Passage. If you've visited my sister-blog at Canadian Ctories then you may already be reading my semi-fictional account of that expedition.

I almost paddled past another artifact from these long ago days when I went to Igloolik in 1997. Parry had erected a mast on Melville Peninsula opposite Igloolik island in 1821. The idea was that it would be seen by Franklin as he crossed the arctic mainland and direct him south to Resolute Bay where he would return to England. As it happened, Franklin was forced back south long before reaching this pole and so never saw it. I understand it was still there in 1997 and had I paddled just a few more miles along the coast, I would have seen it.
Posted by Michael at 9:01 AM

Reminds me of the getting-ready-to-go chapter in Farley Mowat's Never Cry Wolf, where the government sends him the middle piece (only) of a 3-piece collapsible canoe, which he trades for a normal canoe, which is strapped to the bottom of the plane & which he surreptitiously loads up with Moose Brand beer before the pilot flies him up to his camp.

If you ever write a book about this, the working title can be Never Cry Stickleback!

Bonnie - Great title suggestion! Farley Momat is widely known in the arctic as 'Hardly Know-it'. Some people like to say he learned most of his stories in bars not out on the barrens, but he's a great read whatever you want to believe.