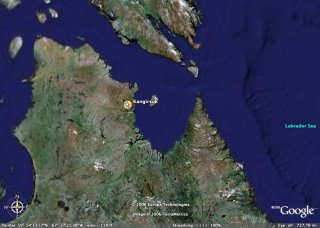 Every now and then something happens to stop you in your tracks and make you feel good all over. I had one of those moments earlier in the week. Years ago when I was teaching in a small Inuit village in northern Quebec called Kangirsuk, I lived with a family in order to try and improve my Inuktitut language skills. It was the village where I watched an elder build a qajaq in the old way, using a bow drill and caribou sinew for lashing materials. I wish I had known that people with his skills were rapidly disappearing at the time. I would have paid more attention to him!
The lady of the house was named Ikuma. She was an outspoken and fun loving lady who taught me many things about life even though my language skills remained poor. When my wife and I brought our first child home from the hospital, it was Ikuma's lessons on how to fold and put on a diaper which saved us from certain disastor!
This week a friend of mine was speaking to Ikuma as she passed through a northern airport and he said, "She spoke with great fondness of you. Tears came to her eyes as she told me that she still refers to you as "irnira" "my son" in her conversations with others... and that there never has been a teacher so attuned to the Inuit..."
Now are those nice words or what? I am so touched by these words. Maybe it's time I went 'home' before she disappears as well...
Posted by Michael at 12:13 PM

You know, you're right. I really should go... and come back with some stories! Got any time off? You'd love it!

This is a wonderful story and must make you feel good!

My children and I were studying Inuit some months ago. They were very interested in learning.

What a wonderful experience for you. I hope you go back to visit soon and visit Ikuma!

I have a friend who is an auditory specialist. She flies up to Iqaluit (correct spelling??) every summer to test the children's hearing. She loves those kids!