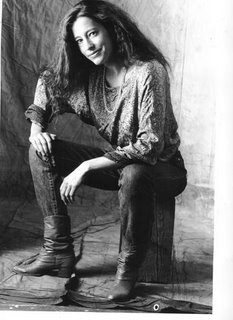 You might not think this young lady was ready to go kayaking, but let's look closely. That little smile. Doesn't it say, "Let's go!" to you? And the casual pose. Surely she's up for an outing of some kind. Just look at those boots. They're ready for some serious work at the put-in, I'd say. But best of all, is the tarp. Look at the size of the thing. That says, "Let's do some serious kayaking-camping, dude. Let's talk about several weeks in the bush! Let's get it on down to the water..."
All to say, when I went paddling today, on my favourite little lake, I wasn't alone. For the first time since the fishermen appeared in April, there were other signs of life. Kayaking life, actually. I spoke with a young lady out in her brand new Dagger, an excited beginning kayaker. She was so thrilled to be out on the water. Then there was a older couple in some 'swamp darters' boats, little open cockpit jobs, which just love to sneak into every little creek to explore. They tried to avoid eye-contact, but I yelled, "Hello" anyway and waved, not easy with a paddle in your hands. Then a young guy paddling a canoe, you know, the way they sit just aft of center with the thing cranked right over so there's hardly any freeboard left at their hip-side. He glided around looking very sure of himself. Fortunately the motor boats weren't out churning up some wake for him. Might have caused some panicky moments.
I did my usual circuit, along one shore, under the two bridges, down the river to the dam and back (no, the naked lady wasn't sun-bathing today), back up the other shore and then the long open crossing back to my put-in. A quick, pleasing hour or so on the water in familiar surroundings. Just the cure for the nagging little thoughts which irk you for no reason.
Then I went home and wondered what to do about the hog-back keel line in my SOF which lies dormant in the garden shed. Not able to reach a decision, I went into the workshop and put the finishing touches on my new Greenland paddle, a spare for my trip coming up to the Gaspé abd beyond. I know you're not supposed to, but I think I'll put satin vanish on it. I love the feel of vanish in my hands. So sensual, somehow...
Posted by Michael at 8:19 PM

she maybe doesn't want to get salt water on her leather boots, not good for them.
its nice to meet people out on the water, I always say hi to everbody on the water but its funny how some people will avoid 'eye contact' as you say.
Dave, one of the paddlers out on Saturday, had a wooden 'greenland' style paddle but it had a 90º feather on it which I thought unusual? he told me Duncan Winning(paddling man of much fame here) made it for him many years ago and after that he made non feathered ones.

I don't like to get boots on my salt water either!