I first met Kent LeBoutillier at a Newfound Rendezvous several years ago. 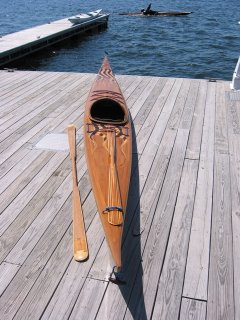 He had brought along several boats, an SOF and this strip built boat, an Outer Island. To say the boat was stunning is to vastly understate Kent's skills. Not only had he chosen a wonderful paddling boat design to build, but his woodworking skills resulted in a work of beauty and class. We were all fighting for a chance to paddle it! 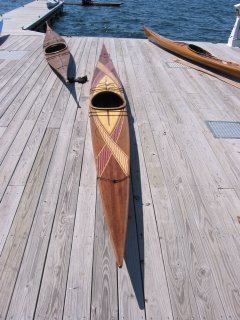 This year Kent brought another strip boat, his newly created Derijp, replicated again with superb skill. Many people have seen his pictures of this boat on QajaqUSA, but to see it in the flesh is to marvel. He recently responded on QajaqUSA to the question of how this version paddled compared to the Derijp original SOF. Unfortunately he was unable to make the comparison as he was unable to get into the SOF version due to the ribs restricting his entry. One advantage of the strip version is obviously the ease of entry into the rib-less interior.
Isn't it great to have skilled people like Kent producing these beautiful boats? It would be interesting to get a Greenlander's reaction!
Posted by Michael at 10:18 AM

Wow - what a beautiful boat. As marvellous as a well made guitar.