We were all mad back then... 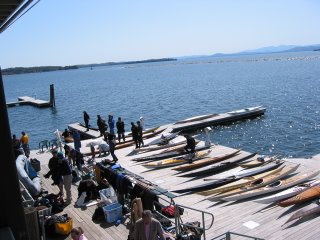 It's over. Summer can now officially start anytime in northern Vermont. The assembled kayakers have rolled in competition once again at the Burlington Boathouse. The highlights for me were Michael S's walrus pull and seeing a number of young people out there learning and enjoying.
However, the big disappointment was the flat refusal of the triple decker tour boat to even attempt a basic balance brace. I mean, even I can do that if pushed as hard as they were. Isn't that so, Cheri? Remember, that time in your 'cheater' boat? 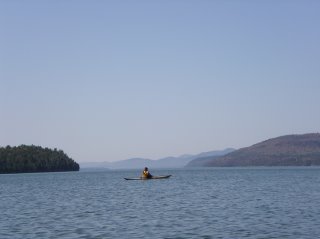 On Sunday 20 paddlers headed out for lunch on the far side of Lake Champlain. It was sunny, with a light wind, lots of good humour and best of all - at least for coffee freaks - was Turner's amazing expresso beach cafe! Who would have thought that what Wendy Killoran wrote about in Sardinia would show up on a beach in northern Vermont! Turner added to the ambiance by appearing in his black monk's habit and surrounded himself with people equally dressed in black. Only Freya was noticeable absent...
Posted by Michael at 7:45 PM

Sounds like fun -- I'm so envious! I hope they'll have a good friendly rolling competition at SSTIKS. Everyone with a roll should participate. I wonder what my score would be...

Summer is just starting for you, but here in Australia winter is almost upon us...
I look forward to reading about your summer adventures!

Thanks for dropping in for a look! Come again, you never know what summer will bring!