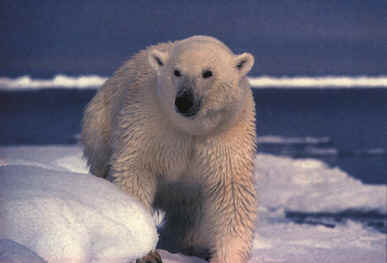 A few years ago some kayakers left Salluit on the north coast of Quebec on a paddling trip to Kuujjuak at the head of Ungava Bay. It's a desolate coast yet an interesting one to travel along for many reasons . You begin with high hills which plunge into the chilly waters of Hudson Strait and gradually as you move eastward the land flattens out somewhat. Kangirsujjuak is a large fjord-like inlet and the first village you encountered after leaving Salluit. The high surrounding hills make it a very scenic paddling venue by itself.
At the turn into Ungava Bay, called Cape Hopes Advance, is the village of Quoartaq. From this point southward, it is not unusual to encounter walrus basking out on floating ice pans. You can also expect to see bears. In fact, the whole of Ungava Bay has a reputation for bear sightings and sometime bear chases!
Our kayakers had had a good trip getting as far as Cape Hopes Advance, but the ice and poor weather in Ungava Bay began to slow them down. By the time they arrived at the mouth of the Payne River, they were nearly out of food. For some reason - perhaps it was the rough tidal action at the river mouth that intimidated them - they chose to leave their boat and walk to the village of Kangirsuk a few miles up river. Here they were able to re-supply and head back to their waiting kayak. Today there is a rough road leading down to the coast, but back then it was a tough walk across very uneven, rocky ground and tundra ponds. By the time they arrived at their boat they were exhausted.
Coming around the shore towards their campsite, they could immediately tell something was wrong. Their double kayak had been broken into and badly smashed. Their gear was all over the place, much of it torn up and chewed. Their trip was over. Bears had made certain of that! They had little choice but to hike back to Kangirsuk and fly out.
What should they have done? It's hard to say, but I would have paddled up the river to Kangirsuk rather than leave my kayak - and sole means of travel - unattended in bear country. There is a slack water opportunity to get up the Payne River, not to mention several quieter sections near the shore where you can work the eddies. Failing that, they might have made an effort to put their boat up on a stone kayak rack. There is no shortage of stones in that area and an hour's work would have put the kayak up where a bear might not recognize it as a food source. Giving it a good wash before leaving it may also have made a difference. Still, bears will be bears, it is their country too and they do love to munch on kayaks now and then... Yum!
Posted by Michael at 11:16 AM

sort of like the raccoons at the Sweetwater BCU/Greenland week - those little lines of raccoon tracks up & down the kayaks every morning cracked me up.

And they only got worse the further south you go in Florida! I think collectively they may actually be responsible for elevating the IQ scores in the state...

it is definitely very cold to kayak in such weather where u can see this cute but not so pleasant furries..

yaks.. the polar has eaten my kayak!

My son was in Singapore a year ago and will be returning to attend university there in August. I'm hoping to visit at some point. Who knows, we might paddle together!

Yikes. Isn't there some easy way of letting a bear know it's not food? Like a bear repellent spray? Was there actually some food inside the kayak or was it just the smell of humans on the kayak that attracted the bear?

Polar bears seem to be naturally curious and will check out anything they think might be a potential food item. I suppose in this case there may have been some food odour left in the kayak. I don't know those kind of details. You might leave some old neoprene socks out to distract bears. Then you could get nailed for killing a bear without a permit...

the only knowlege I have about polar-bears comes from nature programmes on the television, they seem to be very large and very hungry, part of which is caused by global warming and man 'getting into' their territory. its difficult but we will go where we want to. and at least they chase down and eat them too!!

sorry, I meant at least they DIDN'T chase down and eat them too..

[url=http://community.bsu.edu/members/buy+online+Viagra.aspx]buying Viagra without a prescription[/url]