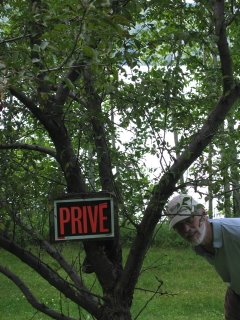 About a year ago I was astounded to notice for the first time that a new house had been built just above a nearby beach. It was a beach I often paddled along, but until that day I had never seen any signs of the house or its ongoing construction. Admittedly - and mercifully, as it was a monstrosity built in European French chateau style - it was somewhat hidden by trees which lined the beach, but still... What caught my eye in the first place was not the house itself, but some new signs posted at the waters edge. These signs had been tacked onto trees as though fixing them on proper posts would be adding insult to the additional expense of catering to strangers who should already know their place and not need to be told to push off. It was bad enough that these lowly dregs of society had been taught to read, let alone allowed to roam freely upon the planet's sacred waters in their ridiculously tiny hand propelled boats.
The signs made it very clear: people like me were to KEEP OUT! 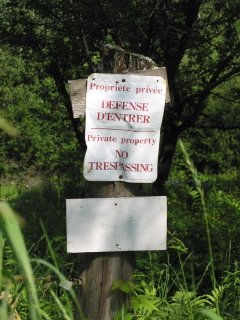 Now I'm not one to insist on camping or otherwise using the front lawns and bushes belonging to people I don't know, but I don't need to be told to 'Keep Out' either. Like most people, I land on private beaches only when in dire straits and I do so with a 'Leave No Trace' philosophy. Otherwise I paddle past, but it irks me that a growing number of property owners feel the need to be so protective and possessive of their land. What are they expecting? That we launch massive invasions, hold noisy rock fests, trash everything they own and then slip away into the darkness of the night knowing we've just staged another French Revolution and beheaded yet another monarch? 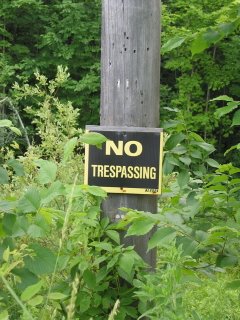 There is one interesting thing about the signs however, and that is their variety and how they withstand the passing of time. Some well-to-do owners have managed to go beyond the crass store bought stuff and fabricated beautiful gates and rock walled entrances. Other signs have aged remarkable well and produced naturalized art objects of themselves in spite of their owners' intentions. To me this speaks loudly and profoundly. It's clear that nature doesn't like the signs either and slowly re-creates them into something of it's own, quietly erasing and sometimes even changing both their message and the medium they're written on. I like nature, a lot! Sort of an invasion from within...
Posted by Michael at 9:21 PM

We have a state park near hear where suddenly Faux Log Cabins are going up. Big, giant, immense log cabins. Being on the border of all the wilderness of the state park they all surround their property with large numbers of red and black "KEEP OUT" signs. Apparently to keep park users out. :) that is unless they think thieves will read the signs and decide to go rob another house!

I always wondered why the bastards thought I'd want to go on their property for? They killed everything that was good about that land when they put up their 4 car log garage.

When you think of the time and effort they went into roaming around their property line putting up all the signs to quell their paranoias you really start to feel how self-absorbed they must be. When I think about that, I want to post a bunch of signs facing their land that say "KEEP IN". :)

we've been faced with irrate owners and a policeman once sying 'you cant camp here, it says so on the sign on the gate', when we've pointed out we came off the water and didn't know there was a gate or a sign(honest) we've usually been allowed to stay. watery folks must be better than the road users then?