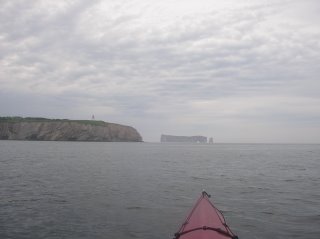 I was back in L'Anse à Beaufils and on the water by 8:30 am, heading northwards towards Percé. The day had a rainy feel to it with low hovering clouds and undulating mists. The low wind and the tide were both in my favour so it only took me a little over an hour before I found myself off Cap Blanc and in sight of Percé. Along the way I had threaded my way through a field of fishing pots and boats doing their usual early morning chores. Some people had waved and seemed interested in my solitary journey. I was something different paddling through a life of sameness, I suppose.
Bonaventure Island beckoned off to my right hand side and I bowed to it's charms. Leaving the fishing pots, I headed across the 5 km or so of open water and was soon gazing up at the reddish coloured rocky shores. Suddenly to my adventurous mind the island became something much greater in my imagination! Here was an island with rock bound shores, numerous old and abandoned homes, a potentially tumultuous seacoast, few landing spots and, as I was soon to discover, it's very own gannet colony!
It was an miniature adventure island for the kayaker who lacked the months of time and the sheer guts and strength, both physical and mental, to do the real thing! Within a few hours or less, one could circumnavigate and pretend one had obtained a small taste of the same thrill and wonder that going around a real and far away exotic place would provide many times over. I paddled with renewed vigor and excitement!
I started to experience some of the fear that rocky coastlines stir up in the hearts of small boaters. The ocean swell began to grow and the winds picked up, although they provided nothing like the feelings of dread I had at Cap Gaspé. Here I was well within my comfort range. Seals were abundant and curious, graciously getting off their rocky thrones to venture over to see me close up as I went by. I passed the only landing spot on the whole island other than the larger commercial dock on the island side facing Percé. It was a tiny strand of sand, tucked away behind some outer reefs, the single place which could afford safety in a storm. The guy at the kayak outfitter had told me the owners of the beach didn't allow landings however... Somehow this didn't mix very easily into my adventure fantasy where hospitality would be freely offered to seafaring folk. 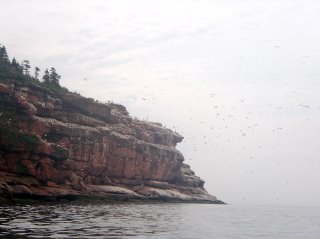 Finally as the cliff face beside me rose to a crescendo it became frosted over with a layer of white birds. Thousands more birds of several species: gannets, mures, guillemots and gulls were swirling through the air. There were birds to the left, to the right, in front and behind and all of them screeching their hearts out! What a sight! More birds floated in the water, some in groups and by themselves, ready to dive or flap away in horror at my approach. I was stunned by the sights and sounds which surrounded me. 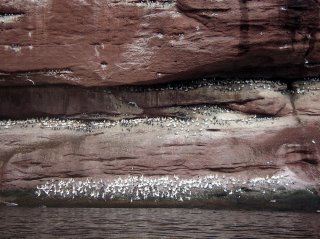 I paddled in slowly, taking pictures and a short movie in a ridiculous attempt to capture the impossible. I went right up as close to the cliffs as I dared to get a feel for life in a smelly bird colony. I paddled out to be the distant observer. Either way it was overwhelmingly busy and busting with action and excitment. I suppose after half an hour or so I reluctantly paddled on and continued around the island, passing a few tour boats in the process. 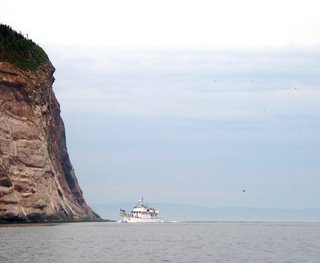 Once again Percé Rock and then the village itself appeared as my circumnavigation came to an end, but then so did the calm winds. As I entered Percé harbour, the winds steadily stiffened from the north. I turned the boat to get one last look at the hole in the rock before heading back down the coast. It was hiding in the mists and waves, slowly disappearing as my trip neared its conclusion. 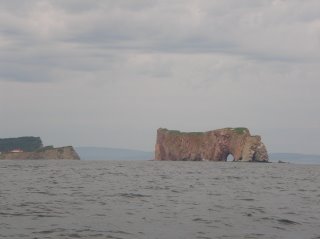 Unlike it did heading out, the wind has risen and began working in my favour, pushing me back to my launch site over the next hour or so. As I passed through the fields of fishing pots, I could see them bending to the current. The tide had reversed and was pulling me home as well. At 12.30 pm I passed through the light surf and pulled my boat above the foam. A family watched me carry my stuff up the beach to the car as they were eating their lunch. To their minds, I must have appeared from nowhere! I headed back to my campsite to see what the chef's lunch special was going to be that day. It turned out to be some yummies remaining from a trip I'd nearly taken last summer down Quebec's Lower North Shore. That trip had suddenly ended just as it was beginning - but that's a whole other story! Oh well... the meal tasted as good today as it would have then. Just the dinner companions had been changed!
Posted by Michael at 9:05 AM