The Reford Gardens of Grand Metis 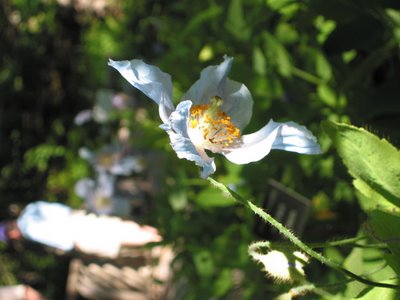 Returning from my trip to Prince Edward Island, I went to visit the Reford Gardens in Grand Métis, Québec. These famous gardens were created by Elsie Reford when illness forced her to give up the horseback riding and hunting trips she went on with her husband when vacationing at her Métis home. With the help of her gardener, she began by transforming the banks of a little stream which passed beside the house into a rock garden and from there her work spread out to the lawns and orchard areas beside the house. Today the gardens are as she left them, a magnificent sight to behold, a delight to walk among, a calm place amidst the storms of life. Here are a few quotes from the garden's web site explaining the background of the gardens: 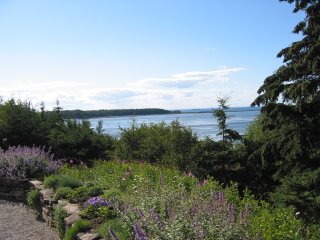 "Situated at the confluence of the Metis and the St. Lawrence rivers, The Reford Gardens/Les Jardins de Métis sit high above the water’s edge. Elsie Reford created these gardens at Estevan, the property she had been given by her uncle, George Stephen. In the 1920’s she began transforming her property into a garden. Gardening became the passion that ruled her life. Over more than thirty years she designed and developed a garden that is renowned for its imagination, its unique botanical collection and the careful integration of plants in a naturalistic setting.

"In 1918 her uncle, Lord Mount Stephen, gave her his house and property at Grand Metis, Estevan Lodge and the Metis River. She had come to Metis regularly as a young woman and from 1904 had regular use of the property. There she learned to fish, ride, hunt and canoe. In 1909 she rode from Gaspé to Grand Metis and several years later rode around the Gaspe peninsula with her two sons. After being given the property she added substantially to it, acquiring adjacent farms and properties. In 1926 she enlarged Estevan Lodge, adding a second story, quarters for domestic staff and several outbuildings. That same year, she began gardening. Over more than thirty years, she designed and built the gardens, expanding them substantially every year. She spent her last summer at Grand-Metis in 1959. She died at her Drummond Street home on 8 November 1967 in her ninety-sixth year.

"The gardens are also the result of a unique collaboration. Elsie was the gardener and her husband, Robert Wilson Reford, the photographer. He took photographs of the gardens over a period of almost fifty years. In the darkrooms he built for himself in Estevan Lodge and his Montreal home, he developed pictures of the landscape, the flowers, and the family and friends who visited Grand Metis. No other garden in North America is blessed with such a complete pictorial record." 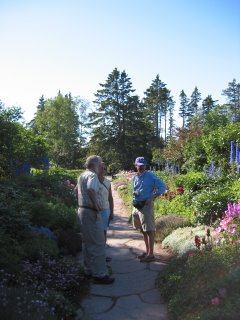 We arrived at the gardens with only an hour or so to go before closing, and the place was almost empty, most visitors having left for the day. We were able to stroll about like we owned the place. And what a place to own! The profusion of flowering plants and pathways are almost magical. If you've never been in a classic English garden, then this place is surely a Mecca, a place you must visit at least once in your lifetime. For kayaking buffs, the river passes by just below the cliffs and presents ample challenges regardless of your skill level.
Posted by Michael at 11:10 AM

I love th poppy photograph, I cant get blue ones to grow. I try to visit gardens whenever I go anywhere, there are some amazing places out there.
love the kayaks photographs, the black one looks very interesting, what kind is that one?
musicians are always welcome at camp firesides, you'll be in demand!

Claire, the blue poppies are indeed hard to grow! The black kayak and the frame below it are both 'skin-on-frame' Greenland kayaks I've built. The black one has a canvas 'skin' painted black. The frame is nearly ready to be 'skinned' and then painted. It is my new 'cheater' rolling boat.